The "Lost" Books of Aleksandr Solzhenitsy

When Aleksandr Solzhenitsyn died at aged 89 in August 2008, his reputation had been in flux for a long time. Even so, while most obituaries acknowledged the power and significance of The Gulag Archipelago and his novel One Day in the Life of Ivan Denisovich, he was nevertheless dogged to the grave by accusations of anti-Semitism, reactionary nationalism, and even pro-Putinism. And while he may have won the Nobel Prize in 1970, at the time of his death, interest in his later works was low: Indeed, many of these books had not even been translated into English. To many, Solzhenitsyn was an anachronism -- a man, a hero even, who had nevertheless outlived his time.
(read on ...) 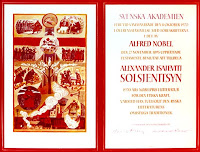 uld All Nobel Prize Winners Be Translated?
By Edward Nawotka

If the Nobel Prize is the most prestigious literary prize in the world, one that virtually guarantees a degree of literary celebrity throughout the author's lifetime, doesn't it go without saying that all the authors works should be translated, at the very least, into English? As discussed here before, English is for many editors and publishers, the "gateway language" for a book to reach readers who might not be able to read a translation in their own language.