An invitation from The Daily Beast: 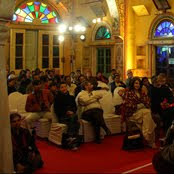 Welcome to the Jaipur Literature Festival!

For over a hundred years, Jaipur, the so-called "Pink City," was famously gray. It was only in 1882 that it was painted pink (the traditional color of welcome) in honor of a visit by Prince Albert, Queen Victoria's consort. That sense of hospitality is apt for its literary festival, opening today. Now in its fifth year, from the start the philosophy has always been that it should welcome as many readers as possible. Some 20,000 are expected, but this is not a place with green rooms, wrist bands, or VIP areas, despite the fact that this year's lineup is just a few starry names shy of a large constellation.

Just as the first-time visitor to Jaipur is astonished to see elephants trotting down the freeways with the cars, the first-time visitor to the Jaipur Literature Festival can expect to find his or herself cheek by jowl with their literary heroes. Co-founder William Dalrymple recalls Vikram Seth perching on the floor in the food tent when there were no chairs, and Julia Roberts (unrecognized) being told to get out of the way. His partner in creating the festival, Delhi-based publisher Namita Gokhale, has fond memories of sitting with Indian poet Gulzar on the lawns of Diggi Palace as his Oscar nomination for Slumdog Millionaire was announced. An awe-inspiring moment typical of a festival with its finger on the pulse of the lightning connection between East and West, be it in film or publishing.

Read more about the famous festival and check in for updates throughout the week... >>