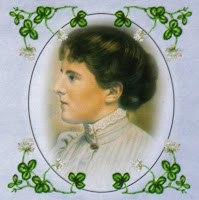 The exhibition "Mary Webb: Neglected Genius" illuminates the dramatic and tragic life of this early twentieth-century British novelist, who was able to present the subtlest truths in poetic yet precise language. Her writing fuses close observation, strong emotions, and lyrical expression.
"Mary Webb: Neglected Genius" will be on exhibit at the Grolier Club of New York from January 28 through March 13, 2010, and will then move to Stanford University’s Cecil H. Green Library from May 17 through August 29. This is the first exhibition of the life and literary output of this best-selling Depression-era author.
"Mary Webb: Neglected Genius" showcases manuscripts, typescripts, personal letters, and important association copies originally owned by Webb. The exhibition will feature the manuscript of Webb’s last unfinished novel, Armour Wherein He Trusted.
This treasure is the only one of Webb’s full-length novels to survive in manuscript form, the others having been burned by necessity for fuel in the Webb household fireplace.
Also on display will be Webb’s copy of Precious Bane into which is tucked the letter of appreciation that Prime Minister Stanley Baldwin wrote to her in the year before her death. Thomas Hardy’s copy of Webb’s novel Seven for a Secret, dedicated to him and inscribed by the author, will also be on show.

Webb was afflicted at the age of twenty with an incurable thyroid disorder that marred her physical appearance. She struggled against sickness and fatigue the rest of her life, and died an early death in 1927 at the age of forty-six. Sensitive and self-conscious, Webb wrote poetry and tales of country life as a way of exploring the larger meaning of existence. As she probes the interplay between love and hate, struggle and submission, and birth and death, her characters and settings are transformed into universal symbols.

Mary Webb was a champion of the non-conformist and the underdog. She defended the right of the individual against societal pressures, and expressed an intuitive awareness of the collective unconscious of humanity. Webb believed folklore and religion to be expressions of timeless myth and symbol, an outlook with parallels in the theories that her contemporary, Swiss psychiatrist Carl Jung, was later to make famous.

Webb was admired in her lifetime by a small but distinguished group of literary men and women, including Dame Rebecca West, J. M. Barrie, John Buchan, Arthur St. John Adcock, and G. K. Chesterton. She won the coveted Prix Femina Vie Heureuse literary prize in 1925 for Precious Bane. But her books sold in small numbers. Fellow writer Caradoc Evans bluntly summarized his friend’s short and tragic life: “All her life she had wished for riches, fame, applause, admiration, babies . . . and she got nothing.”

Recognition and acclaim came to Mary Webb six months after her death. Prime Minister Baldwin praised her writing in 1928 at a Royal Literary Fund dinner and chastised the press and public for not recognizing Webb’s genius. After seeing the Prime Minister’s speech under newspaper headlines proclaiming Webb’s “Neglected Genius,” the reading public rushed to buy her books. Jonathan Cape quickly published a seven-volume Collected Edition of Mary Webb (each volume of which became a best seller). Biographies were written, and dramatizations and movies made of her work. Her first editions were collected by some of England’s and America’s most discerning collectors. Jonathan Cape and Webb’s widower reaped rich rewards.
"Mary Webb: Neglected Genius" showcases the remarkable life and legacy of this modern writer ­ warmly human, deeply compassionate, and with insights relevant to our lives today. For more information, visit the exhibition website.

A deluxe two-volume catalogue will accompany the exhibition, available to visitors onsite at the Grolier Club, and online through University Press of New England (UPNE), exclusive distributors of Grolier Club publications.
The first volume of the illustrated two-volume exhibition catalogue contains almost two hundred items from Webb’s literary archive, along with a biography, bibliography, literary essays, and synopses of her novels.
The second volume of the catalogue is a fine press edition of Clematisa & Percival (printed for the first time from the manuscript), a fairy tale written by Webb while a teenager to amuse her younger siblings. Both volumes feature original artwork by California graphic artist William Bishop.

LOCATION AND TIMES:
"Mary Webb: Neglected Genius" will be on exhibit at the Grolier Club of New York from January 28 through March 13, 2010, Monday through Friday, 10 am to 5 pm, except for Monday, February 15, when the Club will be closed for the Presidents Day holiday.
Open to the public free of charge.

Bookman thanks so much for sharing this, my colleague remembered how much I love Mary Webb and told me to take a look.

I've been a fan since seeing the TV show of Precious Bane with Janet McTeer as Prue Sarn (1989 according to IMDB) and then reading all the books and re-reading them. "Armour wherein he trusted" is unfinished, and kind of beautiful for the lack, like the Venus de Milo.

Mary Webb is one of my favorite authors, and I've always wondered why she isn't better known. Neglected Genius is right! Precious Bane is a masterpiece and Gone to Earth right behind it. I'd like to see this show.