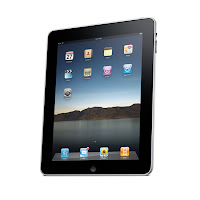 The media has reacted with delight to the launch of Apple's iPad, although the e-reader capability attracted mixed reviews.

Claudine Beaumont, Telegraph technology editor, commented that it "looks exactly like a giant iPhone, right down to the "home" button at the bottom of its 9.7in touch-screen." But she added, "the best feature is ibooks, the e-book reading software that knocks Amazon’s Kindle and Sony’s Reader into a cocked hat. Novels are beautifully presented . . . The pages of the books resemble proper printed pages, with a sense of texture and authenticity to them. Turning pages is achieved with a swiping gesture, or a single tap in the right-hand margins."

"Downloading books is incredibly easy too."

The Times' Mike Harvey said the iPad is "slim and elegant" and pointed out that with the ibook function, "More than 125 million people already have one-touch purchase with Apple and even if a fraction of these use the bookstore, the other e-reader companies such as Amazon had better look out."

The Guardian's technology correspondent, Bobbie Johnson, described the device as "hefty but not heavy, feeling solid and responsive in the hand. The screen is about the size of a large paperback, but it's just half an inch deep."

However, he added, "a bright LED screen is never going to be perfect for an e-reader" and "switched into e-book mode, the way the iPad emulates the printed page feels fairly natural, if not entirely on a par with rival e-book readers such as Amazon's Kindle.

"The backlit screen doesn't come anywhere near the clarity of electronic ink, which means it's going to prove a lot harder on the eyes of bookworms (it's great for reading in bed, one Apple flunky told me, keen to stress the positive side)."

Gadget magazine Stuff’s Tom Dunmore described it as "the most desirable tablet - or e-reader - on the market." although he too added "Certainly the iBooks app is beautiful, but the screen is so bright that reading will be much more strenuous than on the Kindle. I'd guess that future versions of the iPad will feature screens that can switch between easy-on-the-eye eInk and fast moving colour - but those screens are only in the prototype stage right now."
Posted by Beattie's Book Blog at 6:11 am