THE PHOENIX FILES PART 2 DUE FEBRUARY

The Phoenix Files: Arrival was published in June 2009 to critical acclaim, selling a massive 10,000 copies to date.

w the wait is over for Chris Morphew fans with the next release in the series The Phoenix Files: Contact out next month.

As Peter and his friends struggle to contact the outside world, they’re going to find out just how far Shackleton is willing to go to make sure the secrets of Phoenix stay hidden.
And the clock is still ticking... There are 88 days until the end of the world. 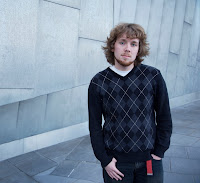 Morphew, has enjoyed a whirlwind past 6 months since the release of his debut YA novel as part of a six-title thriller series, The Phoenix Files.

Praise for The Phoenix Files continued with book reviewers and fans alike eagerly awaiting the next instalment.

And with Chris recently being revealed as one of the authors behind the pseudonym H. I. Larry of the best-selling series, Zac Power, 2010 is set to be an even bigger year for this talented young Australian writer.
Posted by Beattie's Book Blog at 8:58 am