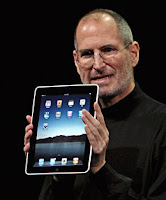 Publishers have welcomed the launch of Apple's iPad as an "important step" in the transition towards digital books, with one branding it "the most significant development yet". Dan Franklin, digital editor at Canongate, said: "I sat there and thought 'this is what we've been waiting for'." John Makinson, chief executive at Penguin, said the announcement represented "an important step in the development of a digital audience for books".

Apple's chief executive Steve Jobs unveiled the much-anticipated iPad, alongside the iBook and its iBook Store, at a press conference, with the iBook Store launched with the backing of five publishers, Hachette, Penguin, Simon & Schuster, Macmillan and HarperCollins.

The Bookseller, like many publishers, followed the event via live video streams with news of the iBook Store not breaking until about 90 minutes into the press conference which began at 6pm GMT. The Apple chief insisted that the iBook Store would sit alongside its popular iTunes and Apps stores. Jobs said that the company was ready to open "the floodgates" to other publishers, adding that he wanted to "go a bit further" than Amazon.com's Kindle.

Dan Franklin, digital editor at Canongate, told The Bookseller: "It's the most significant development yet. Everyone's been talking about the iPod moment [for e-books] and who else was going to deliver it but Apple!"

The device is 0.5inches thin, weighs 1.5 pounds and has a 9.7inch display. It will not be available internationally until "June/July" at the earliest, shipping in 60 days, with 3G models to follow after 90. It is not yet clear whether international users will be able to buy the device without internet access, or what price it will be sold at outside of the US.

But publishers are already eagerly anticipating the iPad's arrival in the UK, with Franklin pointing out that Amazon's Kindle "hasn't taken root here". He highlighted the $499 price point as "not too expensive" for a multi-purpose device, and said he was "encouraged" by signs that publishers would be able to set their own prices.

Franklin added the iBooks Store, effectively an iTunes for books, was one of the biggest draws, as well as the "slick and sexy as hell" user experience. Makinson agreed: "The iPad and iBook Store will, we believe, appeal to existing Penguin customers and also attract millions of new readers to the world’s best books."

Tim Cooper, director of direct and digital marketing at Mills and Boon, added: "It looks great, fundamentally it's going to make a pretty big difference. It's fantastic news for publishers and the consumers as well, it must have sent a few shivers down the spines of other companies with e-reading devices. At that price point and with those multimedia opportunities, it's
great for everyone. I think this will definitely help the e-book market."

Agents spoken to by The Bookseller at the A W Bruna party held at the Groucho last night were also thrilled to learn the news of the launch, with one quipping that Andrew Wylie had already begun offering "iRights" to his authors' books.

Blog: Publishers respond to the launch of the iPad
Posted by Beattie's Book Blog at 6:08 am