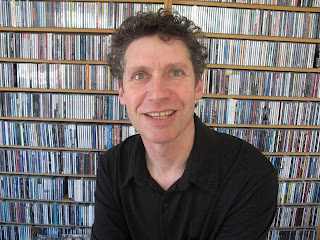 Bollinger reveals the strange inner life of a music critic

Nick Bollinger’s new book 100 Essential New Zealand Albums is, by anyone’s standards, an astonishing work. Not only did the much-followed music writer have to sort through his and others’ entire collections of New Zealand albums, dating from the 1930s to today, he then had to sit down and re-listen to hundreds and hundreds of albums to come up with his final selection.
Photo of author - Katherine McRae.

‘Being a music critic can certainly seem like a strange existence,’ says Bollinger, who lives with his partner Kathy McRae, a director of Shortland Street, and their three daughters in Auckland’s Point Chevalier.

‘When the family is out I can sprawl on the couch and crank up the stereo – my ideal working conditions’, he says. ‘But more often I’m listening and scrawling down notes while starting the dinner or driving the kids somewhere, or using headphones when I can’t compete with the rest of the noise.’

well as writing this book, his second in four years – the first was the entertaining How to Listen to Pop Music in Awa Press’s Ginger Series – Bollinger also produces his regular programme The Sampler and appears on Music 101 for Radio New Zealand National, writes a music column in the Listener, and listens to and reviews the new albums from both New Zealand and overseas artists that pour into his letterbox every week.

‘There has been a huge growth in the sheer amount of music made locally, which means the job is getting bigger every year,’ he says.

And selecting one hundred New Zealand albums to highlight in his new book was not easy. ‘It was a tough call deciding which albums had the enduring quality to be deemed “essential”, especially when it came to recent releases.’

As Bollinger says in the introduction to his book: ‘More than ever, it has become necessary to seek out and celebrate originals, the singers and bands who come up with something unpredictable and beautiful that the rest of us can make part of our lives. I hope, like me, you find them here.’ It’s a challenge music-lovers won’t be able to resist.

Footnote:
Bookman Beattie reckons that Music Man Bollinger has got at least as many albums as the Bookman has books!
Posted by Beattie's Book Blog at 1:50 pm