BRITAIN’S top authors are set to cash in on electronic books as Apple prepares to unveil its latest gadget — a new reading device that could shake up the world of publishing. 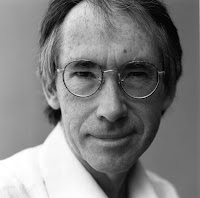 cEwan, the Booker prize winner, has become the first mainstream British author to sign an exclusive deal through Amazon to double the royalties he receives on his back catalogue.

Other writers seeking a bigger slice of the publishing pie include Martin Amis and the historian Antony Beevor.

Last week they backed a campaign for authors to be given royalties of up to 75% on ebooks.They argue that publishers can no longer justify taking a larger share when they no longer pay overheads such as printing, shipping and storage.

Their demands come ahead of the launch of Apple’s new tablet device in California on Wednesday. Nicknamed the iSlate, industry experts believe it could revolutionise reading in the same way that the iPod altered the way in which we consume music.

The device is expected to have a 10- or 11-inch colour touchscreen and will allow readers to download a library of books. It will also enable users to surf the internet, watch videos, play games and listen to music. For all the technological advances, however, its cost could make it prohibitive for reading books and newspapers on a daily basis. According to analysts, the iSlate will retail at $1,000 (£620), compared with $489 for Amazon’s electronic reader, the Kindle.

Ebooks currently cost $10 (£6) each on Amazon, a little less than a paperback. Apple’s offerings are unlikely to be cheaper and, according to some industry observers, may even be more expensive. If the market for electronic books follows the model for iTunes, Apple’s music service, it is unlikely to result in significant savings for consumers.

An album on CD format sells for an average of £9, and in many cases less. Assuming that the album has 12 songs, it will cost £9.48 to download all the tracks individually online.

Digital locks on ebooks prevent readers from lending novels to friends. In some cases, they do not even own the book. Last year Amazon remotely deleted copies of George Orwell’s 1984 from hundreds of Kindles because of a copyright infringement.
Full piece at The Times.
Posted by Beattie's Book Blog at 6:15 am