THE LADY IN THE TOWER
The Fall of Anne Boleyn
By Alison Weir
Illustrated. 434 pp.
Ballantine Books. $28
(Jonathan Cape in UK)

The story of Anne Boleyn, second wife of Henry VIII, ended in May 1536, when the master executioner of Calais — sent for specially, and said to be an adept in his art — separated her clever head from her seductive body with one clean stroke of his sword.

Historians are still puzzling over Anne’s downfall. Henry had fought for years to extricate himself from his first marriage and create a world where he and Anne could be husband and wife; to achieve it, he had split Christian Europe apart.
How did he become so alienated from her that he wanted her dead? Had she really slept with her brother George? Who was the prime mover in alleging against her multiple acts of adultery, involving five men? Was it Henry himself, crediting some slander and lashing out in blind rage? Or his minister Thomas Cromwell, fighting for his own career? What part was played by the papist supporters of the Princess Mary, Henry’s child by his first marriage? Were all these parties, for different reasons, acting together? And at what point was Anne’s doom sealed? Did her fortunes begin to falter in January 1536, when the king’s first wife died and Anne miscarried a child? Or was she brought down over a few days, in an atmosphere of fulminating panic that infected the entire court? 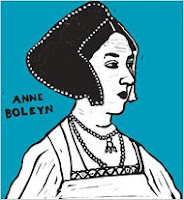 Anne is one of the most striking female presences in English history, but we can’t even be sure of her date of birth, let alone her bedroom secrets. She was the daughter of Sir Thomas Boleyn, a courtier and diplomat, and her uncle was the powerful magnate Thomas Howard, Duke of Norfolk. She had spent some of her girlhood at the louche French court, and when she appeared at the English court in 1521, she brought with her polished sophistication and new fashions.
She was not an acknowledged beauty, but she was sparkling, sinuous, a natural intriguer. When Henry fell in love with her, he already wanted to be free of his long marriage to Catherine of Aragon, because he had no son to succeed him, and Catherine’s childbearing years seemed to be over.
Cardinal Wolsey, the powerful statesman at the king’s right hand, expected Henry to remarry for diplomatic advantage, and a state of courteous warfare set in between himself and Anne. To everyone’s surprise, Anne refused to become Henry’s mistress; she outfaced Wolsey, who fell from power, and played Henry astutely till he broke away from Rome, declared himself head of the English church, arranged his own divorce and married her secretly.
Anne was identified with the reformist tendency in religion, and long before the king had permitted a vernacular version of the Bible, she kept the Scriptures in French set up in her chamber. She was crowned queen in June of 1533, at which time she was heavily pregnant with the child who would become Elizabeth I. Henry cannot have been pleased by the emergence of another daughter. He seemed to take it philosophically at the time. But miscarriages followed, and his attention began to move elsewhere.

Read the full review at NYT.
Posted by Beattie's Book Blog at 12:00 pm

I absolutely love Alison Weir, and think 'Lady Elizabeth' is a great novel. Hisorical fiction itself is a brilliant genre and one which still has so much potential