At Festival in India, Books Are the Buzz

JAIPUR, India — A crowd, some members sitting on the floor, listened attentively last week as the author Amit Chaudhuri described the influence of writers from Ireland and the American South on his work. 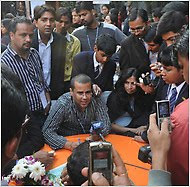 Outside the tent where he was speaking, fans and photographers mobbed the Indian poet Gulzar, who shared the Oscar for the song “Jai Ho” in “Slumdog Millionaire,” blocking his exit from a hall. Elsewhere the Pakistani wunderkind Ali Sethi was fending off people who wanted to have pictures taken with him.

That was just the first day of the Jaipur Literature Festival, a five-day extravaganza that in only five years has become the official annual celebration of a vibrant and resurgent Indian and South Asian literary scene. By the time the festival ends on Monday, organizers estimate that some 30,000 people will have seen more than 200 authors and other speakers.

Indians might be known worldwide for being mad about cricket and Bollywood musicals, but they are also increasingly embracing literature in all its forms. Book sales have been rising as incomes and literacy have steadily climbed in recent years. Even the country’s once insular Hindi film industry, known for its formulaic song-and-dance dramas and thrillers, is taking notice of the boom and adapting popular novels into movies.

Vikram Chandra, the author of “Sacred Games,” said that when he was attending boarding school near Jaipur, few authors commanded the kind of celebrity that was on display at the festival, where schoolgirls — some from the elite Mayo College, at which he studied — chased him and other authors down for autographs.

Literature in India “was a cottage industry confined to the university,” he said. But in the past decade, and especially in the past five years, a booming economy has created big audiences for books, including genres like literary fiction, young women’s literature and children’s books, which were tiny niches earlier. Book sales here are increasing at about 5 percent a year, according to PricewaterhouseCoopers.

“What we see now is intimately linked to the economic growth,” said Mr. Chandra, who teaches creative writing at the University of California, Berkeley.

One indicator of the vibrancy of literature in India today was the presence of film stars from Mumbai and socialites from Delhi at the festival, Mr. Chandra said. “That itself is a sign of strength, when you can get the beautiful people in any culture to connect” with a medium, he added.
More at NYT.
Posted by Beattie's Book Blog at 6:51 am