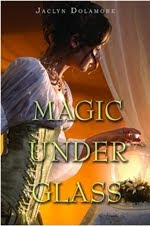 arlier this week, criticism grew online over the cover of Jaclyn Dolamore’s Magic Under Glass, a January fantasy novel from Bloomsbury Children’s Books—the second time in recent months one of the publisher’s covers has come under fire. Thursday, Bloomsbury apologized for the cover and released a statement saying that it would stop supplying copies of Magic Under Glass, Dolamore’s debut novel, and that books with a new jacket would be made “available shortly.”

The controversy calls to mind the online furor last summer over Justine Larbalestier’s Liar, also published by Bloomsbury, in which the cover used an image of a white girl, when the protagonist is described in the book as being half-black. The house designed a new cover for Liar before it went on-sale. In the case of Magic Under Glass, the circumstances—a discrepancy between the description of a character’s ethnicity in the book and her appearance on the cover—are much the same. The protagonist, Nimira, is described in the story as having brown skin and considered by others to have “exotic” features.

Here is Bloomsbury’s full statement: “Bloomsbury is ceasing to supply copies of the US edition of Magic Under Glass. The jacket design has caused offense and we apologize for our mistake. Copies of the book with a new jacket design will be available shortly.”
Posted by Beattie's Book Blog at 7:30 am