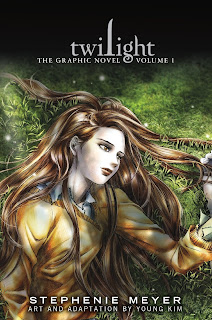 Today (Wednesday 20 January), Atom, an imprint of Little, Brown book group, announces that the highly-anticipated first volume in the graphic novel adaptation of Stephenie Meyer’s Twilight. Twilight: The Graphic Novel, Volume 1, will be published in hardback on 16 March 2010 at £12.99. As is typical in graphic novel publishing, due to the length of the prose novel, the book will be divided into two volumes and the release date for the second volume is yet to be announced.

Twilight: The Graphic Novel contains selected text from Meyer’s original novel with illustrations by Korean artist Young Kim. A rare fusion of Asian and Western comic techniques is reflected in this black-and-white graphic novel with colour interspersed throughout. Stephenie Meyer consulted throughout the artistic process and had input on every panel.

“I’ve enjoyed working on this new interpretation of Twilight,” said Stephenie Meyer. “Young has done an incredible job transforming the words that I have written into beautiful images. The characters and settings are very close to what I was imagining while writing the series.”

Publication of the book was announced on the US magazine Entertainment Weekly’s website today and also appears on StephenieMeyer.com and TheTwilightSaga.com.

Samantha Smith, Atom Editorial Director, said, “It’s incredibly exciting for us to be able to introduce fans, who might not have read a graphic novel before, to this wonderfully innovative and imaginative format. Stephenie Meyer’s UK fans have always been hugely supportive. We’re sure that they’re going to be just as excited as we are to see Twilight in such a new and exciting way.”