The author Walter Mosley specializes in his own kind of flawed Everyman: easy to underestimate, easy to overlook, like the title character from his allegorical 2008 novel, “The Tempest Tales.” But a new spotlight will fall on Tempest Landry and the other characters from the book as they wrestle with big questions about perceptions of good and evil in Mr. Mosley’s first play, “The Fall of Heaven,” which opens on Thursday at the Cincinnati Playhouse in the Park. 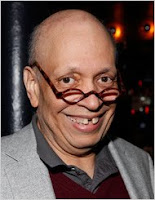 A 58-year-old New Yorker best known for his Easy Rawlins mysteries like “Devil in a Blue Dress,” Mr. Mosley has written dozens of books (including science fiction), short stories and essays on race and politics. The play is an adaptation of “Tempest Tales.” His foray into the theater isn’t so surprising. “My writing is kind of made for people to speak,” he said.

Discussing “Fall of Heaven” by telephone a few days before previews began, he explained that the theater setting was “a way to make the work deeper.”

“Having the story up there onstage meant I could get that many more insights, from the director or the actors,” he said, not to mention the dimensions added by lighting and audience response.

In the play and the novel, Tempest (Leland Gantt), a ne’er-do-well from Har

lem, is minding his own business when he is felled by 17 police bullets, his MP3 player mistaken for a gun. St. Peter (Anthony Marble) sentences him to hell, citing a life of petty crimes and other transgressions.

Tempest disputes that judgment, arguing that he bent the rules to survive and made ethical choices, at least based on the situation. He gets a second chance by being sent back to earth in another body, guided by an angel named Joshua (Esau Pritchett). If he does not admit his sins (and go to hell), Joshua warns, heaven will fall and allow the Devil, who’s named Basil Bob (Anthony Marble), to reign supreme.

The full piece at NYT.
Posted by Beattie's Book Blog at 7:10 am