Like most authors, James Patterson started out with one book, released in 1976, that he struggled to get published. It sold about 10,000 copies, a modest, if respectable, showing for a first novel. Last year, an estimated 14 million copies of his books in 38 different languages found their way onto beach blankets, airplanes and nightstands around the world. Patterson may lack the name recognition of a Stephen King, a John Grisham or a Dan Brown, but he outsells them all. Really, it’s not even close. (According to Nielsen BookScan, Grisham’s, King’s and Brown’s combined U.S. sales in recent years still don’t match Patterson’s.) This is partly because Patterson is so prolific: with the help of his stable of co-authors, he published nine original hardcover books in 2009 and will publish at least nine more in 2010. 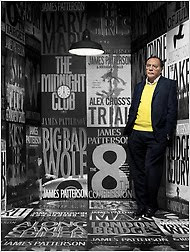 There are many different ways to catalog Patterson’s staggering success. Here are just a few: Since 2006, one out of every 17 novels bought in the United States was written by James Patterson. He is listed in the latest edition of “Guinness World Records,” published last fall, as the author with the most New York Times best sellers, 45, but that number is already out of date: he now has 51 — 35 of which went to No. 1.

Patterson and his publisher, Little, Brown & Co., a division of the Hachette Book Group, have an unconventional relationship. In addition to his two editors, Patterson has three full-time Hachette employees (plus assistants) devoted exclusively to him: a so-called brand manager who shepherds Patterson’s adult books through the production process, a marketing director for his young-adult titles and a sales manager for all his books. Despite this support staff and his prodigious output, Patterson is intimately involved in the publication of his books. A former ad executive — Patterson ran J. Walter Thompson’s North American branch before becoming a full-time writer in 1996 — he handles all of his own advertising and closely monitors just about every other step of the publication process, from the design of his jackets to the timing of his books’ release to their placement in stores. “Jim is at the very least co-publisher of his own books,” Michael Pietsch, Patterson’s editor and the publisher of Little, Brown, told me.."
The full piece at NYT.
Posted by Beattie's Book Blog at 7:01 am