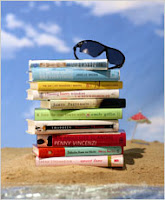 Reacher, ex-army, a maverick of no fixed abode, blue-eyed, with fists “the size of footballs”; Reacher, the hero of 13 novels by the world’s biggest-selling action writer, Lee Child. The latest is Gone Tomorrow. But the great thing about Reacher books is that you can read them in any order you choose. New Zealand dad opens up Die Trying, published in 1998. He can tell straight off the bat that it’s a thumping good read. It says on the inside jacket that it won the WH Smith Thumping Good Read Award.

He adjusts the sun umbrella. It’s a beautiful summer’s day. And it’s hot in Chicago, too. Chapter one: “Centre of the city, a busy sidewalk, a Monday, last day of June. Broad daylight, bright summer sunshine. The whole situation had materialised in a split second.” Yes, because there’s Reacher minding his own business, politely opening the door for a woman who has her hands full with her dry-cleaning, when suddenly four guys armed with a 9mm Glock 17 hustle the two of them into the back of a waiting car.

Reacher doesn’t go looking for trouble. It comes looking for him. The thing to do is keep cool. Assess the situation. Calculate the odds. Above all, shrug. “He shrugged at her...He looked at her and shrugged...He moved a half-inch closer and shrugged...She asked, ‘Who are you?’ He smiled and shrugged.” But soon enough he’s ripping off someone’s head with his bare, football-sized hands.

Excellent, thinks New Zealand dad, then puts the book down - the family are clamouring for a picnic lunch. He helps pack up the car, pockets the keys to the rented cottage, and drives to a nearby beach. They carry baskets and bottles down a steep track of native forest; it opens out onto a secluded bay. The water is lovely. Wonderful to swim, eat kai, read Reacher, doze, and then it’s time to leave. But, wait! Where are the keys to the cottage? Oh, Christ. He gets on his hands and knees, and brushes the sand. Nothing! Oh, God. What to do? You can’t break into the cottage – glass everywhere, the owners would have a fit. The holiday is ruined. The family bicker and puff their way up the track to the car. Look in the glovebox – you never know. Haw! There’s the keys! Good old dad! Add that one to the family’s secret history.

Reacher and the woman, FBI special agent Holly Johnson, have been kidnapped by a cult. The cult leader, Borken, wants to wage war. “Holly asked, ‘Suppose they’re working for Iraq?’ Reacher shrugged. She asked, ‘So what the hell is this about?’ Reacher shrugged again.” And again, and again, but he’s got stiff competition. “The sheriff shrugged...Borken shrugged...Holly shrugged across the distance at him.” Reacher raises the stakes: “He shrugged as he walked.” Meanwhile, an innocent passerby is shredded with a chainsaw, and stuff blows up.
As the afternoon cools, New Zealand dad hoses the garden. He switches the nozzle, which he bought at Hammer Hardware for $6.99, to jet. The radishes are looking good, there’s still a few strawberries, the beans are standing tall. He switches the nozzle to shower.

Reacher reaches for a weapon: the Baretta. “It delivered quarter-ounce bullets at nearly 800 miles an hour.” Holly watches his heroics with hot interest. “They kissed. She felt lithe and athletic. Firm, but soft. Young. Scented...”
New Zealand mum says: “We’ve run out of bread and sauce.” Dad drives to the town’s only store. Two long-haired girls are outside, licking ice-creams, their knees drawn up as they sit on the bonnet of their car. Their skin is so smooth in the summer twilight. They don’t look at him.
Later that night, New Zealand dad grunts as he sits down on his canvas chair outside the caravan to finish his book. Goddamned mosquitoes! He slaps on the Dimp. Reacher kills everyone who needs killing. “The bullet entered the front of Borken’s forehead and was out of the back of his skull three ten-thousandths of a second later...It travelled over the forest before the pressure wave built up in Borken’s skull and exploded it.”

Footnote:
Steve Braunias' piece above was first published in the Sunday Star Times magazine yesterday, January 24, 2010.
I asked Steve about the title - #252 - and he replied that he had got bored with the SST title and replaced it with a number corresponding to how many columns he had written since he started his coluymn wqith the Sunday newspaper - hence the Jack Reacher one is titled, Number 252.
Thanks for allowing Beattie's Book Blog readers to share # 252 Steve.It made me laugh out loud.
And I am a Jack Reacher fan!
Posted by Beattie's Book Blog at 10:25 am