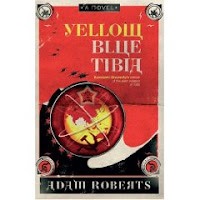 Tipped as the science fiction novel that would finally win a Booker prize for the genre, Adam Roberts's Yellow Blue Tibia failed to even make the longlist for the UK's most prestigious literary award last year, but has just been shortlisted for the British Science Fiction Association's best novel prize alongside some of the biggest names in the genre.

Set in Russia in 1946, Roberts's novel sees a group of Soviet SF authors concocting a story about aliens poised to invade the earth which, post-Chernobyl, starts to come true. Last summer, acclaimed science fiction author Kim Stanley Robinson said it ought to have won the Booker. A professor of 19th-century literature at the Royal Holloway as well as an author, Roberts is shortlisted alongside Ursula K LeGuin for her historical fantasy Lavinia, China Miéville's surreal venture into crime fiction, The City and the City, and previous winner Stephen Baxter's tale of the survivors of a drowned earth, Ark.

"I am really delighted to be shortlisted ... The list of winners of the novel prize, going back to John Brunner's marvellous Stand on Zanzibar in 1970, doesn't contain a single second-rate book – not one in all that time," said Roberts on learning of his shortlisting. He pronounced himself "surprised" to be among the finalists, "provoked in part by the fact that I've never been shortlisted for this award before". "That only makes me more chuffed to be on the list this year, of course," he said. "It's particularly nice to be in such extraordinary company: any of the other three could win and deserve it."

The contenders for the prize are nominated by BSFA members who then vote for their favourite, with the winners to be announced on 4 April at the Eastercon convention. Niall Harrison, editor of the BSFA's journal, Vector, said he was surprised to see some "much-discussed" books fail to make the shortlist, including Robinson's Galileo's Dream, the late Robert Holdstock's Avilion and Kit Whitfield's In Great Waters. Margaret Atwood's post-apocalyptic The Year of the Flood and Iain Banks's Transition also missed out on a shortlisting.

"But the four nominees do showcase the strength and breadth of the SF and fantasy being published in the UK at the moment – from metafictional historical fantasy (Lavinia) to a deep-space voyage (Ark) – and it's hard to pick a front-runner," Harrison said. "It's particularly pleasing to see Adam Roberts receive his (overdue) first nomination, in the light of the Booker fuss kicked up by Kim Stanley Robinson last summer."

This year's awards also saw science fiction author Hal Duncan withdraw from contention for the non-fiction prize, after being nominated for his essay "Ethics and Enthusiasm". "There are other voices you should be listening to first," Duncan wrote on his blog, pointing to fellow shortlist Deepa D's essay "I Didn't Dream of Dragons", an exploration of being an Indian fantasy reader/writer which Duncan called "intelligent, illuminating and important".

Read the rest of Alison Flood's piece at The Guardian.

Footnote:
The British Science Fiction Association finalists for the 2009 awards.

There are only four nominees in the Best Novel category, and six nominees in the Short Fiction and Best Artwork categories, due to multiple ties.
The awards are voted on by members of BSFA and the British Annual Science Fiction Convention (Eastercon). Winners will be announced during Odyssey (Eastercon 2010), to be held April 2-5, 2010 in Heathrow, London.
Posted by Beattie's Book Blog at 6:32 am