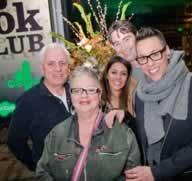 20.01.10 Katie Allen and Tom Tivnan reporting in The Bookseller

The launch of "The TV Book Club" on More 4 and Channel 4 this week attracted an "incredibly upmarket" audience "in line" with expectations according to the channel, while the 10 selected titles have continued to see an uplift in sales.

The two shows drew an average audience of just under 350,000. The More4 debut on the evening of Sunday 17th January gathered 261,000 viewers (peaking at 290,000) with a 62% ABC1 audience while 83,000 tuned into the daytime Channel 4 repeat (peaking at just under 100,000) according to independent monitoring panel Broadcast Audience Research Board (BARB).

A spokesperson for Channel 4 said: "We are pleased with the performance of 'The TV Book Club'. Not only are the viewing figures in line with expectations but the demographic is incredibly upmarket."

The record trounces the viewing figures for the book club slot on the final series of "Richard & Judy" on UKTV Channel Watch, which at one point dropped to 13,000, although R&J's original show on Channel 4 peaked at 1.5m.

Retail deals, media coverage and stickering all seem to have had a further effect on sales of the 10 novels, although the biggest names, Sarah Waters and Nick Hornby, have seen the largest lift, selling just over half of the titles sold last last week (a combined 31,092 copies).

However titles to enjoy significant fillips include Belinda Bauer's Blacklan

The entire list has now sold 160,636 since publication; 104,663 in the last two weeks. Sales following the first show will not be available until next week.
Posted by Beattie's Book Blog at 6:41 am