Yann Martel: 'Jewish people don't own the Holocaust'
Yann Martel has been critically savaged for writing about the Holocaust in his follow-up to Life of Pi. But, he says, artists have a right to tackle anything
Stephen Moss , guardian.co.uk, Tuesday 22 June 2010 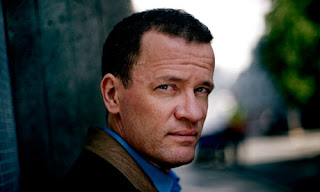 Talking about the Holocaust at nine in the morning in the elegant lounge of a trendy boutique hotel in central London is not ideal. A woman packs up and moves to the other side of the room at Yann Martel's first mention of genocide. I am conscious of the fact we may be speaking too loud. There is an additional problem that my new BlackBerry keeps ringing. I have no idea how to turn it off, and eventually have to ask the concierge to dispose of it.

Martel, the Canadian author who won the Booker prize for the outrageously successful Life of Pi in 2002, takes all this more or less in his stride, though he is a little put out by my incompetence and fractiousness – I rather rudely insist that the young woman who is steering him round the UK and Ireland on the publicity tour for his new novel, Beatrice and Virgil, absent herself from the room while we talk. I'd only finished his book the night before – reaching its dramatic denouement in the bath, if you must know – and feel at something of a disadvantage in talking about it, since he spent eight years labouring over it.

The inescapable fact about the book, Martel's long-awaited follow-up to Life of Pi, is that it has not been very well received. In the US the reviews were what one politely calls "mixed"; in the UK they have been uniformly hostile. The general view is that pretty well all fictional treatments of the Holocaust are doomed, and that this one – about a blocked writer who meets a taxidermist writing a play about "the horrors" who is probably a former Nazi seeking some sort of catharsis – is more doomed than most.

I have taken along a review by David Sexton, literary editor of the London Evening Standard and a critic with impeccable taste, who had accused Martel of being "not very bright" because of a quote in which he said the monkey and donkey which feature in the taxidermist's clunky play, large chunks of which appear in the novel, were appropriate representatives of Jews because they embody mental nimbleness and stubbornness respectively. Martel is keen to see the review, as he has heard about it but has yet to read it. I hand it over and lean back. All in all, I am sensing disaster here.


Read the rest at The Guardian online.
Posted by Beattie's Book Blog at 3:09 pm