Dick Francis remembered at memorial
22.06.10 | Benedicte Page in The Bookseller 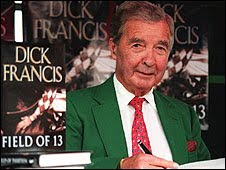 Figures from the sporting world and the book industry came together yesterday afternoon at St Martin-in-the-Fields, Trafalgar Square, for the memorial service for writer and former racing jockey Dick Francis, who died in February.

In an exceptionally warm-hearted service, which included actor Anthony Andrews singing "Oh What a Beautiful Morning" from the musical 'Oklahoma', family members and friends and colleagues from the different areas of Francis' life read passages from his books and paid tribute to the writer's qualities of decency and humanity.

Fellow author Frederick Forsyth described Francis as "one of nature's gentlemen" and praised his ability to tell "a cracking good story."

"Writing brought him fame and wealth, and some in that position become abrasive, rude and discourteous," Forsyth said. "Dick remained smiling, modest, always patient to the humblest."

Penguin m.d. Tom Weldon, who published Francis for the past 14 years, paid tribute to the "wonderful sharpness of mind behind the charm and perfect manners."

Francis' son Felix, who worked with his father on his most recent novels, described the writing relationship between Francis and his late wife Mary as "one of the great literary partnerships", and said: "Dick Francis has been not an individual but a brand, and the brand will live on after him."