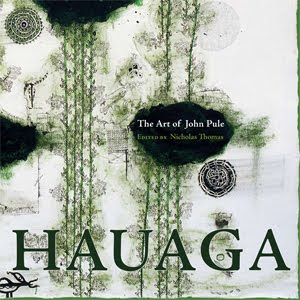 Last Wednesday evening at the John Leech Gallery in Auckland I was privileged to attend the launch of HAUAGA The Art of John Pule edited by Nicholas Thomas and published by Otago University Press in association with City Gallery Wellington.

This handsome, spectacular even, book deals with the art of Niuean-born New Zealander John Pule and is published to coincide with the first major survey exhibition of his work currently showing at the City Gallery Wellington.

Speakers at the event were gallery owner John Gow and publisher Wendy Harrex  followed by Auckland author/academic/reviewer/critic Peter Simpson who officially launched the book. I was impressed with Peter Simpson's address (which doubles as a review really) and he has kindly provided Beatties' Book Blog with a copy so that those not able to be present can read it for themselves. 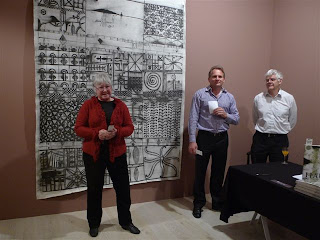 I cannot think of any book that I would rather be launching than this handsome survey of the art of John Pule. As you may know the book is published to coincide with a big survey show of John’s work at the City Gallery in Wellington also called Hauaga (Niuean for “Arrivals”) – it may tour to Auckland and elsewhere later –  though the book is not a catalogue but a free standing publication.

I’ve been looking back over various pieces (reviews, catalogue essays and the like) that I’ve written about John’s work over the years.  One was a newspaper review of a show held in this very gallery in 1998. It began:

I have a hunch that one of the defining visual images of the decade of the 1990s will be the paintings of…John Pule. Instantly recognisable, utterly distinctive, increasingly ubiquitous, and using a pictorial idiom that fuses ancient traditions and contemporary practice, they are visually splendid tokens of our time.

If that comment was true then, how much truer is it now more than a decade later when his work has become even more visible around the walls of the city and for some of us on the walls of our own homes.

It was the features of John’s work I then singled out—its authority, distinctiveness and immediate “recognisableness” – which led to its catching on so quickly with collectors and institutions. Within 5 years of the first showing of his early hiapo-related works in 1993, his work had been shown in Sydney, Seoul, Johannesburg, Brisbane, Apia, Suva, Noumea and throughout New Zealand, with New York, Melbourne and Zurich added soon afterwards. Many good artists work a lifetime without their work receiving anything like that sort of exposure. I guess it was partly a matter of “Cometh the moment, cometh the man’, as the sports writers like to say. South Auckland Pasifica was the flavour of the decade and John was to some extent the beneficiary of that quickening of interest in what was emerging from Otara, Mangere and Grey Lynn.

Not that John has been one to ever beat a populist Pacific drum; he has always been his own man, and kept a judicious distance from any kind of collective visual Pasifika. He talks about this in his excellent interview with Nicholas Thomas published in the book, saying: “I wasn’t really interested in doing Pacific Island things for the sake of it. I never have been.”

How do we reconcile this remark with what I earlier called his “hiapo-related paintings”. Hiapo, is of course the Niuean word for tapa, that  ubiquitous form of bark painting practised by all Polynesian peoples. And it is true that the discovery of this form of Niuean art was crucial to Pule’s finding his feet as an artist. There is a key difference between Niuean hiapo and other familiar forms of bark painting such as Tongan tapa or Samoan siapo. They are invariably strongly repetitious in imagery and pattern. But hiapo is different; it contains elements of repetition, but  is comparatively free-form and spontaneous. As a post-contact phenomenon, it occasionally incorporates European objects – ships, compasses, furniture, people, words and numbers – even plants and flowers like the peonies that grew in missionary gardens. This hybridity and freedom, I suspect, is what John found so appealing, and utilised in his own work. He could borrow the dark colours, the rectangular grid, the unstretched, unframed supports, and fill in the blank spaces with imagery largely of his own devising – an amazingly heterogeneous mix of comic-like narratives, Christian tableaux, birds, beasts, flowers and fish, mythical creatures, aeroplanes, ships and ambulances, geometrical patterns and innumerable surreal inventions.

John’s work has developed strongly as the years have passed, probably the most significant innovation being around 2000 when the rectangular grid disappeared and he launched himself on oceans of white canvas like a trapeze artist without a safety net. The so-called “cloud” paintings have rivalled the grid-paintings in fascination and popularity. In his most recent show at Gow Langsford, just last year, there were signs that he has moved on again; the grid is back, black is the dominant colour, and inset scenes of dramatic encounters on beaches offer fresh sources of imagery; whether this change is temporary or the start of a whole new phase remains to be seen. All these changes of course are fully documented in the book whose big square format is well-suited to the usual shape of John’s paintings.

There are a few other features of the book I want quickly to mention before closing. As well as the frank interview with John, Nicholas Thomas, the editor, has written a lucid essay on the paintings, and there are other essays, by Greg O’Brien – he is especially good at placing John within the poetry-and-art scene of Auckland in the 80s from which he emerged – and by Peter Brunt – he is more philosophical and speculative in focus. There are also  selections from John’s poetry and prose, and among the 80 reproductions are quite a number of his works on paper – lithographs, etchings, woodcuts, drawings – which often combine word and image (as in Restless Spirit and Seven Love Poems) and are among my personal favourites within his work.

All in all it makes for a rich assemblage, and the production values are in keeping with the quality of the work. Congratulations to John and to everyone involved in assembling a publication that does full justice to the unique and inspiring phenomenon that is John Pule. 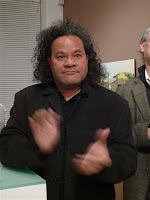 Footnote:
The Bookman bought a copy of the book at the event. It is a truly wonderful piece of publishing with the highest production values and as I said to John Pule at $120 it is a bargain priced way of getting 80+ Pule images! He agreed.
Posted by Beattie's Book Blog at 3:33 pm