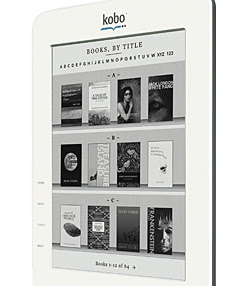 Whitcoulls claims to have sold thousands of Kobos
By Claire McEntee - BusinessDay.co.nz
28/06/2010

Whitcoulls is claiming a win in the debut of its Kobo e-reader as publishers mobilise to cash in on the new e-book market.
The bookseller launched the Kobo e-reader and its online book store a month ago.

Managing director Peter Kalan says New Zealanders have snapped up thousands of Kobos – the first two shipments – and Whitcoulls was taking pre-orders for the third shipment, due to arrive mid-July.
"Demand has been great, it's far exceeded what we expected."

E-book sales through the Whitcoulls website have been building momentum, rather than kicking off with a bang.
"People get the device and tend to play around with it and down-load maybe one title or so and then a week or two later they'll actually start to go on and buy. That's been within our expectations."
E-book sales are also in the thousands, and on average shoppers are buying one book at a time and spending $10 to $15. E-books tend to be cheaper than their print counterparts.
Full story at stuff.co.nz
Posted by Beattie's Book Blog at 9:41 am