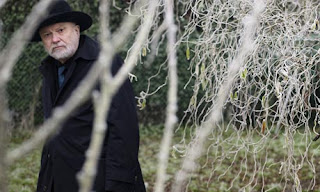 Geoffrey Hill in a portrait for the New York Times magazine in 2007. Photograph: Chris Floyd/ContourPhotos.com

The scandal which has dogged the position of Oxford professor of poetry since last year may finally be dispelled by the landslide victory of esteemed British poet Geoffrey Hill in today's election.
The professorship, first established over 300 years ago and held in the past by poets including Matthew Arnold, WH Auden and Seamus Heaney, is widely viewed as the most prestigious in poetry behind that of the poet laureate. But despite its illustrious history, last year's election took a sordid turn when eventual winner Ruth Padel resigned having held the post for less than two weeks, after it emerged that she had alerted journalists to allegations of sexual harassment made against her rival, the Nobel laureate Derek Walcott.
Hill, frequently described as the greatest living poet in the English language, was voted in by 1,156 votes from Oxford graduates, well ahead the Beat poet Michael Horovitz, second with 353, and eight others. Hill made no comment, but Dr Seamus Perry, deputy chair of Oxford's English faculty board, which hosts the chair, said the poet was "pleased – not least because it's his birthday". Hill turned 78 yesterday.
Former poet laureate Andrew Motion, who had tipped Hill for the role, said Hill's win was fantastic news. "He's one of the two or three best poets writing in English, and an extremely interesting critic. The fit between the way he talks about his poems and the way he writes them, and what a serious university like Oxford is offering its students, is extremely good," said Motion. "There's no arguing with this."
Full report at The Guardian online.
Posted by Beattie's Book Blog at 6:15 am