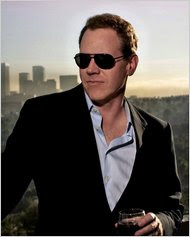 Bret Easton Ellis’s “Imperial Bedrooms” can be described euphemistically as an extension of, sequel to, meditation on or deliberately cobwebby meta-reworking of “Less Than Zero,” the debut novel that put its disaffected young author on the map 25 years ago. It can also be seen as an act of desperation, and it may be all of the above. Whatever its genesis, what this vacant new book does best is demonstrate that there are more ways to be bored and boring in Los Angeles in 2010 than there were in 1985.

Back in the day Mr. Ellis’s restless, druggy characters had to drift around in expensive cars, leaf through magazines, develop anorexia and watch pornography on Betamax cassettes with the sound turned down. Now, thanks to the iPhone, the Internet and their having grown older, the same people have found new ways to stay unamused.

Read the rest of Maslin's scathing review at NYT.
Posted by Beattie's Book Blog at 6:55 am