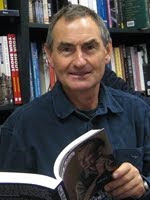 Which is no doubt why the University of Canterbury bookshop has an active promotional program, and why its city satellite store at Christchurch Hospital does 70 percent of its business in general bookselling.

King (pictured) was a young teacher in Tokoroa when he opened his first bookshop, continuing to teach for the first year while his wife Linda ran the store; then there was a role swap and he left teaching to mind the store while his wife worked as a nurse.
His next bookselling move was to buy Coopers in Otahuhu, South Auckland which he built up over the five years from 1980-85.
A move to the South Island saw the start of a serious bookselling operation, the first store being Philip King Bookseller at Linwood Mall. King was involved in the Nationwide chain (later to evolve as PaperPlus) and was a buyer for stationery and books, though his own store was always more concentrated on books.

Stores in Dunedin’s Golden Centre, Riccarton’s Bush Inn and the Big Fresh Shopping Centre in Christchurch followed, and also a city store in Hereford Street: five big stores of 400 sq m each, a staff of 100 including part-timers and a head office above the city store.

Over this time, King also contributed much to the trade, as a Booksellers New Zealand councillor for 12 years, four of them as Chair. His business sense and direct attitude were respected and admired.

Guy Fawkes Day 1993 was explosive for his business. Philip King Bookseller stores had had a loose association with the London Bookshop group, and when London was sold to the then Graeme Hart-owned Whitcoulls, Philip King’s stores were also bought out by Hart, as they had South Island locations that complemented London’s mainly North Island stores. Neither party was privy to their individual sale arrangements with Hart at that time.

So, 1994 was time out and overseas travel. King’s next ambition was to establish a vineyard, but instead he bought a run-down sheep and cattle farm, 915 hectares, near to where he lived in Governor’s Bay (near Lyttelton.) Farmer Philip, together with his wife Sarah Lovell-Smith, planted trees, landscaped the property and rebuilt farm sheds and buildings.
In the process he created an area that every two years becomes the site of Sculpture on the Peninsula, a major Canterbury art event and charity fundraiser.

King’s return to bookselling began with a month long contract in 2002. He was asked to write a report on UBS Canterbury operations for Ian Draper, the MD of Whitcoulls and 50% shareholder of UBS together with University Students Canterbury Association. “I could see the staff rolling their eyes as I strategised a new marketing plan, thinking ‘let’s get this over and he’ll be gone soon,’” says King. In fact he stayed on, restructuring and refurbishing the store.
The full story at Booksellers NZ.  A long piece that is well worth a read. 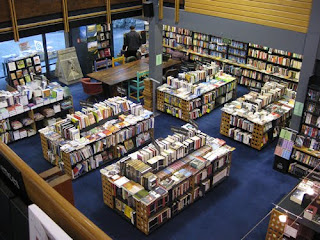 Posted by Beattie's Book Blog at 7:31 am