'Twilight' fans gear up for 'Eclipse' premiere
Frenzy being compared to Beatles' U.S. trip in the '60s
By Elizabeth Guider. The Holywood Reporter, June 23, 2010, 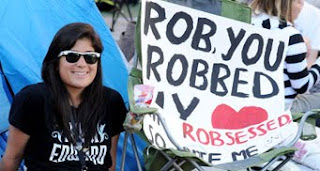 Not since "Star Wars" has fandom been, well, so fanatical about a single movie, putting down stakes in the heart of L.A.'s asphalt jungle days ahead of a world premiere.

But an ever-swelling coterie of vampire lovers, most of them female, have been braving the California sun for days now to get the best chance of seeing the stars of "The Twilight Saga: Eclipse" grace the red carpet at the Nokia Theatre on Thursday night.

Some 550 devotees among the thousand or so assembled downtown for this celebratory sleepover will be rewarded for their perseverance with guaranteed spots on the carpet.

"It's just worth seeing all the stars. They bring the characters that we love so much to life, so we want to see them in person and cheer them on," Yolanda Rodriguez, a 36-year-old unemployed graphic designer who came from San Francisco for the event, told Reuters.
Full piece at The Hollywood Reporter.
Posted by Beattie's Book Blog at 6:39 am