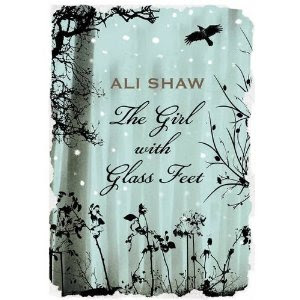 Ali Shaw was tonight (Wednesday, 23 June) named the winner of the £10,000 Desmond Elliott Prize for The Girl with Glass Feet, published by Atlantic Books.

Elizabeth Buchan, Chair of the Judges, comments,
“After some soul searching and much debate, we decided on The Girl with Glass Feet as our winner. This is an extraordinary first novel - bold, original, tragic and endlessly surprising. In its exploration of frozen landscapes, both interior and exterior, and in its precisely detailed and articulated fantasy, it is possible to see a substantial author of the future.”

Ali Shaw has worked as a bookseller and at Oxford’s Bodleian Library, but is now concentrating solely on his writing and is currently penning his second novel.

Shaw spent almost five years writing The Girl with Glass Feet. He drew inspiration from Kafka’s Metamorphosis which led him to reading fairy stories and folklore. From here, he began exploring his own style using magical or fantastical elements within his writing as a way to express emotion.

As with his two predecessors, winners Edward Hogan in 2009 and Nikita Lalwani in 2008, Ali Shaw is also a graduate of a university writing course. For all three, this has proved to be a successful step in becoming a published author. The Desmond Elliott Prize website includes a page of resources designed to support aspiring writers - http://www.desmondelliottprize.org/links.asp

The other books on the shortlist were Before the Earthquake by Maria Allen and Talk of the Town by Jacob Polley.
The Desmond Elliott Prize is a new prize for first novels, now in its third year.  When judging the prize, the judges are looking for a novel of depth and breadth with a compelling narrative. The work should be vividly written and confidently realised and should contain original and arresting characters. Entries are considered from all fiction genres.

The inaugural prize was won by Nikita Lalwani in 2008 for her novel, Gifted. The novel enjoyed great critical and popular success and went on to be named as one of The Observer’s Books of the Year. The Desmond Elliott Prize 2009 was won by Edward Hogan for his novel, Blackmoor.  Edward lives in Brighton and is currently writing his second novel with support from the Prize.

The Winner
The Girl with Glass Feet by Ali Shaw (Atlantic Books)
A mysterious and frightening metamorphosis has befallen Ida MacLaird – she is slowly turning into glass, from the feet up. She returns to St Hauda’s Land, where she believes the glass first took hold, in the vain hope of finding a cure. Midas Crook is a young loner who has lived there all his life. When he meets Ida, something about her sad, defiant spirit pierces his emotional defences. As Midas helps Ida come to terms with her affliction, she gradually unpicks the knots of his heart and they begin to fall in love…
What they need most is time – and time is slipping away fast. Will they find a way to save her?

The Author
Ali Shaw was born in 1982 and grew up in a small town in Dorset. He graduated from Lancaster University with a first-class degree in English Literature and has since worked as a bookseller and at Oxford’s Bodleian Library. He is currently writing his second novel.

The Prize
The Prize was inaugurated in honour of publisher and literary agent Desmond Elliott, one of the most charismatic and successful men in this field, who died in August 2003. He stipulated that his estate should be invested in a charitable trust that would fund a literary award “to enrich the careers of new writers”. Worth £10,000 to the winner, the Prize is intended to support new writers and to celebrate their fiction.


The Desmond Elliott Prize 2010 panel of judges is chaired by Elizabeth Buchan who is joined by William Skidelsky, Literary Editor of The Observer, and leading independent bookseller James Daunt, founder of Daunt Books.
Posted by Beattie's Book Blog at 8:12 am