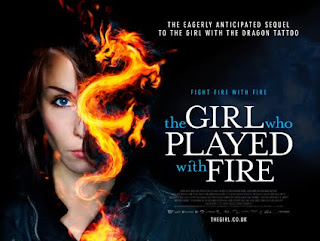 PACKED CINEMA AT  THE GIRL WHO PLAYED WITH FIRE PREVIEW

Friends of The Women’s Bookshop packed out the largest cinema at the Bridgeway in Northcote last night for an advance preview of The Girl Who Played with Fire, book two of Steig Larsson’s brilliant trilogy.

The general verdict seems to be that the Swedish know how to make films as well as write books! Sticking closely to the book, this film, like the first one, is tense, scary and totally absorbing. There was one point where the entire cinema jumped in unison & anyone with wine left in their glass must surely have spilt it!

The strong, feisty heroine Lisbeth Salandar is again brilliantly portrayed by Noomi Rapace – everyone seems to agree that she is exactly as they had imagined her from the books.
The Women’s Bookshop supports these books, and subsequently the films, because, although violent, they are highly political, exposing male abuse of women and creating a strong, feminist young woman who does not let them get away with it.
Posted by Beattie's Book Blog at 2:07 pm