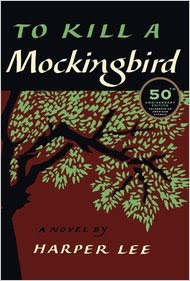 Don't mention the mockingbird! The reclusive novelist who wrote the classic novel that mesmerised 40 million readers

In the 50 years since Harper Lee published her classic novel that mesmerised 40million readers, she has barely written another word  – and turned into an almost total recluse.
So when her friends agreed to give our reporter an introduction, it was on one strict condition...Don’t mention the Mockingbird

Despite the thick, black sunglasses, there is something familiar about the frail 84-year-old woman as she is helped falteringly towards the lake shore.
A delighted smile flickers across her face as ducks and Canada geese flock round to feed on the scraps of bread brought from the care home where she lives in a modest apartment.
Dressed in a clean but faded T-shirt and loosely fitting gingham slacks, she attracts barely a glance from passers-by.
Yet hers is the face which has stared from the cover of a book that has hypnotised more than 40 million readers around the world, one that has frequently been rated as one of the ten most important books published in the past century.

She is Harper Lee, whose only book, To Kill A Mockingbird, won the Pulitzer Prize, is translated into nearly 50 languages and was turned into the Oscar-winning 1962 film starring Gregory Peck. It also made Harper into a multi-millionairess.

Nervously, I approach the novelist, carrying the best box of chocolates I could find in the small Alabama town of Monroeville, a Hershey’s selection costing a few dollars. I start to apologise that I hadn’t brought more but a beaming Nelle – as her friends and family call her – extends her hand.

Read more: http://www.dailymail.co.uk/femail/article-1289793/Dont-mention-mockingbird-Meet-Harper-Lee-reclusive-novelist-wrote-classic-novel-mesmerised-40-million-readers.html#ixzz0sBIrefY5
Posted by Beattie's Book Blog at 8:26 am