'Sexing up' of Anne Frank angers Holocaust victim's family
A British novelist has angered the family of Anne Frank with a “sexed-up” imagining of her time in hiding from the Nazis.
By Ben Leach
The Telegraph,  20 Jun 2010 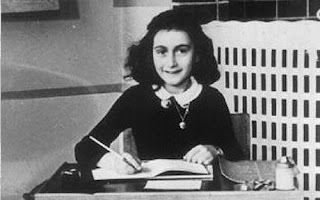 The teenager documented her experiences during the German occupation of the Netherlands during the Second World War before her death in Bergen Belsen concentration camp aged 15.

Now Sharon Dogar, who specialises in novels for teenagers, has written a book of fictional diaries of Peter van Pels, Anne's close friend who lived in the same building while she was hiding in Amsterdam.
The diaries, which are to be published in the autumn, include graphic accounts of Peter’s desire for Anne and intimate scenes between the two, according to The Sunday Times.

The book has been criticised by Buddy Elias, Anne’s first cousin, who chairs a charity devoted to her memory. The 84-year-old, who lives in Switzerland, used to play with his cousin when they were youngsters.
He said he learnt a lot about her and Peter from Anne’s father Otto, who survived the war and had the diaries published in 1947. Otto died in 1980.

Elias has read an advance copy of Annexed, named after the annexe of the office building where the Frank and van Pels families lived in hiding.
“Anne was not the child she is in this book,” he said. “I also do not think that their terrible destiny should be used to invent some fictitious story.”
“From what Otto told me about Peter, he was very shy but in this book he is given a character he did not possess,” he said.
Full story at The Telegraph.
Posted by Beattie's Book Blog at 9:12 pm