Food writing moves from kitchen to bookshelf
Kathryn Hughes charts the rise of the food writer in the past decade, which began with Anthony Bourdain and his irreverent Kitchen Confidential 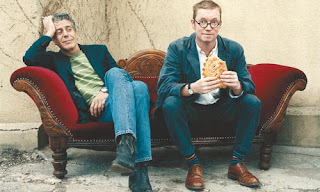 It is 10 years since Anthony Bourdain's Kitchen Confidential rocked into town and gave food writing such a hard slap that it has never quite known which end to stand on ever since. Bourdain's account of life as a professional chef in New York City made midweek service at Les Halles or the Supper Club sound like going on tour with the Rolling Stones circa 1972. In exquisitely dirty prose he described a life of constant high pressure, meaty sweats, singed fingers and drunken all-night come-downs with his crew of semi desperados. Kitchen Confidential blew the idea that there was anything refined or effete about cooking for a living, and gave its entranced readers the kind of insider information that made them feel as though they had been initiated into the coolest gang on earth.

Now, a decade on, Bourdain has published Medium Raw. There have actually been five books in between, but this one is branded as the official follow-up to Kitchen Confidential. There is something identifiably different about it, though. It is not just the tone – Bourdain is in his 50s now, off drugs and a first-time father, so some of the piratical swagger has been burnt off, although the language remains as rococo as ever. It is more that the landscape into which Bourdain is launching his sequel has changed entirely. Whereas Kitchen Confidential was free to slash and burn its way through literary territory that felt relatively static, even stuck, Medium Raw is obliged to pick its way carefully through a richly variegated and much expanded genre. Food writing has evolved its own elaborate ecosystem, bristling with sub-genres, starting points, cross-currents and trip wires. For Bourdain to repeat his trick of 2000 and storm in, steak knives rattling, would not look so much heroic now as simply ignorant. 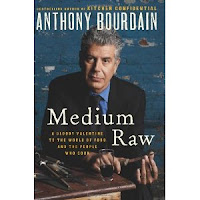 In Medium Raw, then, Bourdain is obliged to insert himself into a crowded field, carefully feeling out his position and defining himself as much by what he is not as by what he is. He is not, he makes clear, Eric Schlosser or Michael Pollan, two campaigning writers (authors respectively of Fast Food Nation and In Defence of Food) whose recent work he admires but whose handle on the science and politics of agribusiness is a million miles from his own blood-and-guts approach. He is not Marco Pierre White, a man who anticipated his foul-mouthed persona but who nevertheless received Michelin stars that Bourdain could never aspire to (by his own admission, he has never been more than just good enough to work as a line chef in second-tier restaurants).

He is not Jamie Oliver, about whose cooking he remains tactfully mute, but whose commitment to doing the "harder thing" he finds admirable. "Most chefs I know, were they where Jamie is on the Success-O-Meter? They'd be holed up at a Four Seasons somewhere, shades drawn, watching four tranny hookers snort cocaine off each other."

Read the full piece at The Guardian.

Medium Raw: A Bloody Valentine to the World of Food and the People Who Cook
by Anthony Bourdain. 304pp,
Bloomsbury. pds.18.99
Posted by Beattie's Book Blog at 7:52 am