April 6, 2010, New York Times
The iPad in the Eyes of the Digerati
By THE EDITORS 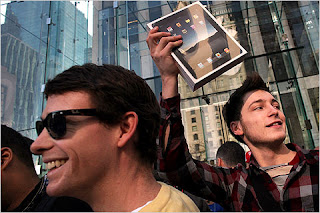 Apple said it sold more than 300,000 iPads on Saturday, the device’s first day on the market. Apple iPad users downloaded more than one million apps from the company’s App Store and more than 250,000 electronic books from the iBookstore. Some reviewers said the iPad could challenge the primacy of the laptop. But others said the device, though gorgeous, simply doesn’t fill an obvious need.

Does the iPad offer designers and users a new medium, or is it merely an iPod Touch on steroids? How much does the form factor of a device drive the creation of new kinds of content and how that content is read, heard and watched?

Read the views of the above by linking here to NYT.
\I found Liza Daly's views most interesting.She is a software engineer specialising in the publishing area.
Posted by Beattie's Book Blog at 9:10 am