That Mighty Sorting Machine Is Certainly One for the Books 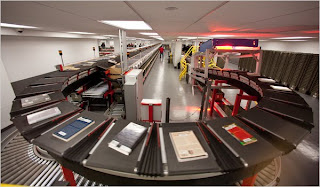 A couple of years ago Salvatore Magaddino, who oversees the distribution of materials for the New York Public Library, complained at a meeting that he was having trouble recruiting book sorters, the people responsible for sorting the millions of books sent each year from one branch library to another.
“It was a mundane, boring job,” Mr. Magaddino said the other day, standing next to a result of that complaint, a gigantic new automated book sorter housed in a renovated warehouse in Long Island City, Queens. This machine — believed to be the largest of its kind — has eliminated much of the drudgery since it was turned on two months ago. Now, when a library visitor anywhere in the system requests a book located at another branch, the automated sorter does the work of routing it.

Here is how it works: On one side of the machine, which is two-thirds the length of a football field and encircled by a conveyor belt, staff members place each book face-down on a separate panel of the belt. The book passes under a laser scanner, which reads the bar code on the back cover, and the sorter communicates with the library’s central computer system to determine where the book should be headed. Then, as the conveyor belt moves along, it drops the book into one of 132 bins, each associated with a branch library. It’s sort of like a baggage carousel that knows which bag is yours and deposits it at your feet.

When he spoke up at the meeting, Mr. Magaddino did not even know that such machines existed. But soon after, a librarian who had been there pointed him to a YouTube video of an automated sorter in Washington State. Mr. Magaddino did some lobbying, and the library decided to order one.

The sorter, which cost $2.3 million, occupies the basement of the warehouse, which recently underwent a $50 million renovation by Gensler Architects, paid for through a combination of public and private money. The library has centralized many of its back-office departments in the building, like digital imaging and conservation, and on Thursday a ceremony is to be held to mark its opening as the Library Services Center.

In an interview the library’s president, Paul LeClerc, explained that the new building was part of an effort to integrate many functions of the research and circulating libraries.

“For a hundred years they were wholly separate library systems,” Mr. LeClerc said, describing the setup as “unrealistic and unsustainable.” Although the systems remain in some ways distinct, with the circulating libraries largely paid for with city funds and the research libraries with private money, many of the departments have been merged. In the last two years the Public Library system — which serves Manhattan, the Bronx and Staten Island — has reduced its staff by about 15.6 percent, partly through the consolidations.

On the first floor of the renovated building, for example, people who order and catalog books for the two systems sit next to one another, allowing them to work together, as they did in ordering and cataloging the collection of the new branch in Battery Park City.

The second floor houses the offices of the digital imaging department, which were formerly in the main library on Fifth Avenue. On a recent afternoon one staff member was scanning the pages of a 19th-century Chinese book, which had been recently cleaned by conservators, while another scanned a series of maps of New York City. Both will ultimately be available in the digital gallery on the library’s Web site, nypl.org.
The full story at NYT.
Posted by Beattie's Book Blog at 8:21 pm