While the most immediate impact of the volcanic ash hovering over Europe has been on attendance at the London Book Fair, the grounding of flights around the world isn't just keeping publishing people from London, it's also keeping them in London. This means that publicity tours and planned publication parties are also suffering.

W.W. Norton is canceling its planned party for author Martin Stannard. The event, to celebrate the release of Muriel Spark: The Biography, was supposed to happen on Wednesday night in New York City. Now, with Stannard stuck in England, Norton, which was co-hosting with Sterling Lord, says the party's off. 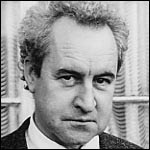 Similarly, Henry Holt has canceled its planned publication party and tour for John Banville,pic right, which was to promote the author's newest Benjamin Black novel, Elegy for April.
Posted by Beattie's Book Blog at 8:42 am