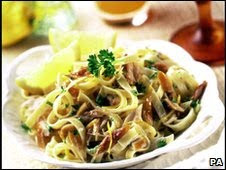 Although Pasta Bible (Penguin Group Australia) is admittedly still some way off the Australian bestseller lists, it is nonetheless further proof that many books can benefit from bad news.

On UK shores, for example, sales of James Frey's Million Little Pieces (John Murray) jumped from an average weekly sale of just 489 copies in 2005 to 1,494 in February and March 2006 following his admission in January that year that large parts of his "memoir" were, in fact, fictional.

Just a few months later, revelations that Kaaya Viswanathan's début novel, How Opal Mehta Got Kissed, Got Wild, and Got a Life (Time Warner), contained "unintentional and unconscious" plagiarism from works by other authors gave sales a 22.9% week-on-week boost from 974 to 1,197 copies sold, despite the fact that all copies were supposed to have been withdrawn from sale by retailers.

And in January 2007, following the Celebrity Big Brother racism row, sales of the late Jade Goody's memoir, My Autobiography (HarperCollins), jumped 71% week-on-week from 246 copies sold to 421.

However, bad news isn't always good for sales. Sales of Jonathan Ross' aptly-titled memoir, Why Do I Say These Things? (Bantam Press), fell 45% week-on-week (from 10,535 copies sold to 5,791) following the infamous "Sachsgate" scandal. It was initially tipped to be one of the Christmas bestsellers in 2008 but ended the year with disappointing sales of just 81,600 copies.

But "Sachsgate" had less of an effect on sales of Ross' prank telephone call cohort Russell Brand's new book at the time, Articles of Faith (HarperColiins), which suffered a far shallower 9% week-on-week fall.
Posted by Beattie's Book Blog at 9:47 pm