SPOKEN FROM THE HEART
Laura Bush
From PublishersLunch 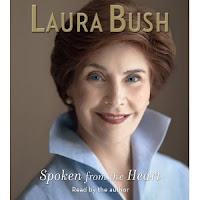 Once again, the NYT has "obtained" (which doesn't sound like "purchased") a pre-embargo copy of Laura Bush's memoir SPOKEN FROM THE HEART, in advance of the book's May 4 publication. (Too bad it's not an iPhone protoype, or Scribner would have a shot at getting it back.)

While the paper's story is attracting reasonable interest, we got a lot more Twitter-play yesterday by focusing on the question raised at Amazon's Omnivoracious. They noted that their "fascination with the cover for Laura Bush's upcoming memoir...touched a nerve with a few readers and emailers." The big question: "I can't decide if it's gorgeous or horrible, but I lean toward gorgeous, in a weirdly inhuman way."

As for the pre-publication revelations, Bush "describes in vivid detail the circumstances" of a car crash she had at age 17 when a vehicle she was driving struck another car and killed a high-school friends of hers. That incident is the focus of the Times' report, though she calls certain remarks by Nancy Pelosi and Harry Reid "uncalled for and graceless" and objects to his George Bush's opponents "calling him names."
Posted by Beattie's Book Blog at 12:41 pm