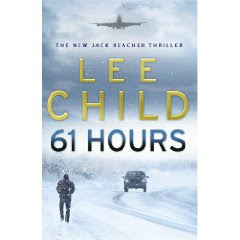 Jennifer Balle, ace publicist from Random House reports on a spectacular week on the road with Lee Child:

After Jodi Picoult having cheekily stole Reacher’s thunder - just as the author was about to arrive down under - by bumping ‘61 Hours’ from the top of the bestseller list, Jack’s sure dealt to her this week. Latest sales figures just out show ‘61 Hours’ has rocketed back to #1 with sales for last week sitting just under the 4K mark.

The team at Random House wishes to thank everyone in the book community for making Lee’s visit such an extraordinary success and one we are all sure to remember. All of the events were terrific. Wellington and Christchurch were especially impressive attracting 550 and 600 respectively. The signing queue after the Christchurch event formed a spectacular spiral, the tail of which publicist Jennifer Balle says never seemed to move.

There were also massive in-store signing queues in all of the main centres which meant that everyone had a chance to share in some Reacher action – whether they popped into the bookshop in their lunch break or trotted along to one of the events at night.

“There were many personal favourite tour moments, but what we can all take heart from is that it’s a powerful reminder to us all just how much readers relish the chance to engage with a  favourite author. The desire is certainly there and it’s up to all of us to create the right opportunities to make it happen,” says Jennifer.

“And, for all those Reacher look-alikes out there, don’t forget to visit www.areyoujackreacher.co.nz to be in to win $5,000. The competition closes 15 May and we’ve got 170 Reacher potentials so far so the final line-up should be fun. Lee had a look at a few of the entries when he was here.”
Posted by Beattie's Book Blog at 5:11 pm