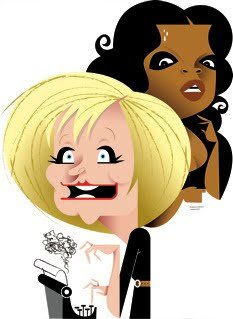 In February of 1988, Oprah Winfrey, the host of a year-and-a-half-old, already extremely popular talk show, landed her first big celebrity guest and flew to Los Angeles for what she has called “the worst interview of my life.” Its subject, Elizabeth Taylor, wore a purple peplum suit, sat in a floral armchair—they were filming at the Hotel Bel-Air—and refused to entertain Oprah’s halting inquiries about her romantic entanglements, one of the themes of the book, “Elizabeth Takes Off,” that she was there to discuss. “None of your business,” Taylor said at one point, fixing Oprah with a hyacinth death stare. Two weeks later, on “Donahue,” Taylor was a doll. Oprah, it seemed, would be sticking to “Housewife Prostitutes” and “Man-Stealing Relatives.” Her executive producer once told reporters, “Oprah does better with controversial shows, with guests that have some kind of passion and emotion and a story to tell. . . . We call them ‘true-life stories.’ ”

Why not call them “true stories”? The term was a hedge, an acknowledgment that without sustained firsthand access to a person—even, say, a ubiquitous billionaire celebrity whose teen-age pregnancy, sexual abuse, spiritual evolution, eighteen-year engagement, weight fluctuations, reading tastes, aching “vajayjay,” and fondness for candlelit baths are familiar to millions—there’s only so much that we can really know. The movie equivalent is “inspired by.” The literary one is “unauthorized biography.” The epigraph of Kitty Kelley’s proudly illicit life, “Oprah” (Crown; $30), is something that Oprah yelled on the courthouse steps in Amarillo, Texas, after being found not guilty of slandering hamburgers: “Free speech not only lives, it rocks.” Kelley, who has published takedowns of Jackie O., Frank Sinatra, and Nancy Reagan, among others, means the gesture as a kiss-off, pointing out the hypocrisy of the fact that Oprah, the professional talker, has demanded that anyone who works for her, or anywhere near her, sign a confidentiality agreement. A Kitty Kelley biography of Oprah Winfrey is one of those King Kong vs. Godzilla events in celebrity culture, but in this case the subject of the exposé has the advantage. However unsportingly, Oprah has locked up tight most of the people who get whatever it is about her that we don’t. Kelley’s pen is not dripping poison so much as slightly curdled milk.

It isn’t for lack of trying. Though Kelley says that she came away from her research “full of admiration and respect for my subject,” the tone of the book is prosecutorial. Among other niggling sins, Oprah—born to a teen-age single mother in Kosciusko, Mississippi, in 1954—fails to buy a fifty-dollar “legacy brick” for a new pathway at her high school in Nashville, mispronounces Barbados as “Barb-a-doze,” and skips the retirement party, in 2007, of a colleague she last worked with three decades earlier. In one section, Kelley indicts Oprah for having, on numerous occasions, “lapsed into potty talk.” (“I can’t even pee straight,” Oprah tells a crowd at the Kennedy Center.) Elsewhere, Kelley writes that Oprah “felt she needed to present herself as open, warm, and cozy on the air, and conceal the part of her that was cold, closed, and calculating.” Well, yes.
The full story at The New Yorker, April 19, 2010.
Posted by Beattie's Book Blog at 7:06 am