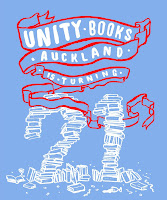 A customer walks into Unity Books. He browses in a swift, pointless way for a minute before turning to the counter where Jo McColl waits patiently for him to ask for help.
“I’m looking for an uplifting book for a friend who’s had a difficult time lately.”
“Is she a big reader?” McColl asks.
“Oh, yes,” he says.
“Umm, okay, so not an Oprah’s book club sort of thing then? Do you know what she’s read lately?”
McColl starts to walk around the shop, handing him books. A Fraction of the Whole by Steve Toltz. The Diving Bell and the Butterfly by Jean-Dominique Bauby.
Another staff member tries Invisible Cities by Italian writer Italo Calvino.
He politely looks at all of these but says no, no, no. He’s a tricky customer. McColl tries something closer to home — poet Glenn Colquhoun’s Playing God — but the customer keeps going back to Yeats. He’s clutching the Collected Poems in his large hands but dithers — he knows he doesn’t yet have the right book.

The right book is a powerful thing. It can hold just the right bit of information, it can convey the perfect message, it can heal and comfort, enrage and inspire.
McColl understands the power of the right book. After more than 30 years of selling books, this tiny 52-year-old mother-of-two, with a bright halo of blonde hair and one of the best collections of belt buckles and cowboy boots in the country, holds a world of words inside her head. Along with her late mentor Alan Preston and also departed friend, the novelist Nigel Cox, McColl founded Unity Books Auckland at 19 High St in 1989, with the simple aim of bringing the right books to the Big Smoke.
“We’d talked about having an Auckland shop for ages,” she says. “Nigel and I had been running Unity Wellington for years, but suddenly it seemed like the time was now. The fact that the stockmarket crash had just happened didn’t seem to deter Alan.”
Sportsman and philosopher Preston started the original Unity Books in
Wellington in 1967. Over the next 20 years, it grew into a hub for readers, writers, beatniks and people who just fancied a good yarn.
“The book trade was seriously British back then,” McColl remembers. “There were very few American books in the stores and New Zealanders didn’t read any modern American fiction like Richard Ford, Alice Munro or Jayne Ann Phillips. So we shipped them in. We lived in fear of being sued. But then the open market really freed things up.”

In Auckland, the new Unity won the support of local artists and intellectuals, as well as lawyers and media personalities. It soon became a distinct entity from its Wellington parent and began to reflect the tastes and curiosities of both its managers and its customers.

Part of that identity came down to how the space inside the store was and continues to be organised. Custom-built tables float like islands on the shop floor and display thousands of books arranged in a spectrum of ideas rather than by rigid categories. Science blends into contemporary philosophy. Law books give way to journalism, which becomes American politics and history. Gay literature nestles snugly alongside business and economics.
The only real rules on these tables are those that govern McColl’s mind. She uses a combination of intuition and experience to arrange books in ways that appeal to people’s senses and most inquisitive child-selves. Customers in Unity pick up, and often buy, books by authors they’ve never heard of on subjects they never knew existed.

Around the front counter dwell small, funny and wilfully snobbish books that appeal to a shopper’s whimsy. “Ooh! What’s this?” the unsuspecting customer will say, as the eftpos machine waits for their pin number, idles, then quietly cancels itself. “Oh, go on then!” they cry, throwing it onto the pile along with the new hardback Paul Auster (lukewarm reviews but who cares?), Guns, Germs, and Steel by Jared Diamond, Born to Kvetch by Michael Wex (the customer isn’t Jewish but he really likes the cover) and Corvus by Esther Woolfson (a memoir about the author’s life with her pet rook).
And then there’s the window. From its opening, the Unity Books front window has been an eye-level cabinet of
curiosities with the power to lure un­suspecting shoppers inside and make even the most thrifty bookman happily pay $180 for that gorgeous volume of Blake. The window is like a siren, calling pedestrians to a doom of eternal diversion.
Unity isn’t loved by everyone. Some deride it as elitist and technophobic. Its policy of stocking all of the essential backlist (such as the complete works of Philip Roth), at the expense of anything popular and pulpy like the new Dan Brown, baffles and annoys many; the occasional casual rudeness of the staff gets up plenty of noses.
A certain smugness inevitably pervades a place where, contrary to a dominant retail culture that’s all about the bottom line, the customer is not always right. Unity by its very nature is prescriptive — it seeks to tell its customers what’s worth reading and what they ought to like.
The shop’s lack of a computer catalogue system is also a frequent point of contention, even derision, especially among other book retailers. Unity’s manager Carolyn Alexander uses the internet to do business but, otherwise, she and McColl between them hold the whole shop — all 16,000 books of it — inside their heads.
“Bookselling is a combination of art and science,” says Joan Mackenzie, friend of Unity, stalwart of the publishing and book retail industries and current book manager for Paper Plus New Zealand. “A computer system can have enormous benefits to businesses but, in a bookselling environment, I think they can also have drawbacks. At Unity, they’re so close to their customers and to their stock that they can get by without it.”
“We’re small enough to do without,” says McColl simply. But all too often customers ask for a book and, when told without a moment’s hesitation that it isn’t in stock, look offended and say, “Don’t you want to check your computer?”
A young mother walks into the shop and browses the New Zealand table. In a light German accent, she says, “Excuse me, I’m looking for a book I saw in, um, Kaikoura? It’s about a man who recognises his love for birds.” McColl doesn’t even bother replying; she hands the customer How to Watch a Bird by Steve Braunias.

McColl and her husband Lawrie bought Unity Books Auckland and half of Unity Wellington in 2002. Preston became ill with cancer and died in 2004 and Cox wrote some of New Zealand’s most bizarre and engaging fiction before succumbing to the disease in 2006. The benevolent ghosts of McColl’s partners seem to lurk in the rafters of 19 High St. She says, “Whenever I’m in Unity, I don’t feel like they’re really gone.”
To remember Preston and Cox and to mark the 21st anniversary of Unity’s Auckland opening, McColl throws a party for customers, friends, publishers and ghosts alike. Even the Wellingtonians are obliged to admit that Unity Auckland has done pretty well for itself.

Speakers include Fergus Barrowman, publisher of Victoria University Press, the architect Nigel Cook, who lived across the street when Unity opened — or as he describes it, “When Jo, Nigel and Alan reached out and grabbed civilisation and dumped it on our doorstep” — and University of Auckland fine arts lecturer Peter Shand, who muses eloquently on “the courtesies of small stores”.
“Shopping at Unity,” he says, “is a joy because they know stuff about us, who we are, our families, and what we like to read. Interactions, knowledge, emotions, connections — these things are what books are all about. But to feel welcome — that’s what Unity is all about.”
Susanna Andrew, Cox’s widow and a former Unity employee who met and fell in love with Nigel behind the shop’s wooden counter, introduces a new award in his name, which includes $1000 of Unity books to go to a local writer each year. “It’s a torment and a madness to believe in the afterlife,” she says, “and to believe you can talk to that person. I’ve been dreaming about Nigel vividly this week while I’ve been trying to decide who should win, but there were so many writers he loved.”
The announcement is made: the inaugural winner of the Nigel Cox Award is Wellington poet Geoff Cochrane.
The speeches are over and the drinking can begin in earnest. Unity’s current crop of young staff go overboard on the free bubbly and have to be driven home.

Independent booksellers face numerous challenges, with the continuing rise of giants like Amazon and the threat of an uncertain digital e-book future. Unity is in much better shape than many independents overseas. A recent survey by the British Booksellers Association found that because of increased competition from the internet and supermarkets, a declining high-street culture and the credit crunch, 102 independent British bookstores closed in 2009, leaving just 1289 in the UK — a decline of 27 per cent since 1999.
But Joan Mackenzie argues that the outlook in New Zealand is far from grim. “I think people are getting tired of the big corporates,” she says. “They’re starting to go back to niche retailers who respect their business and appreciate it.”

She believes retailers here have time to work out where they’ll fit in the new scheme of things. Amazon’s Kindle digital reader has been on sale in the US for more than two years and shows no sign of becoming available here, despite being on sale in more than 100 countries. But with Apple’s long-awaited iPad hitting the shops here later this year, the digital reading revolution is set to really take off — and take New Zealand with it.
Unity, however, has only just hit the internet in a meaningful way, launching a new website last year. McColl says she hopes it will “be a good way of taking books to people outside the city”.
While so many are looking to sell books globally and electronically, McColl wants simply to continue to provide the real thing to local people. The right book is still Unity’s primary concern.
And our tricky customer would be glad, surely. He decided the Steve Toltz was the right gift for his friend after all. 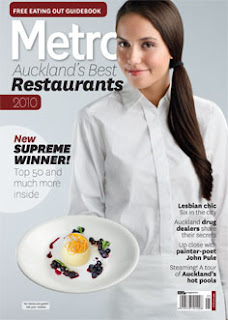 Footnote:
This article was published in the April 2010 issue of Auckland's METRO magazine and is reproduced here with their kind permission.My thanks to editor Bevan Rapson and to Sally Connor for her tribute to a great independent bookstore.

Metro's  latest issue (May), out this week, is their Best Restaurants issue with a free guide book to Auckland’s Top 50 restaurants and the next, the July-August Winter Double Issue, will feature another “Metro Literary Review”, like the one they had in our Sumer Double issue at the beginning of the year. The Bookman is a longtime subscriber to Metro and especially appreciates their generous book review coverage in each issue. And the annual Best Restaurants guide book sits on my office desk for handy (frequent) reference.
Posted by Beattie's Book Blog at 10:05 pm