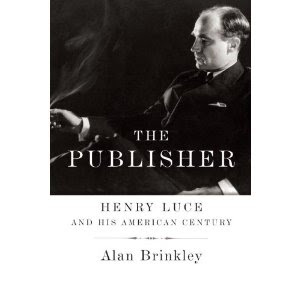 THE PUBLISHER
Henry Luce and His American Century
By Alan Brinkley
Illustrated. Alfred A. Knopf. 531 pages. US$35.

When Henry Luce graduated from the Hotchkiss School in Connecticut in 1916, he received not a single vote in the “most likely to succeed” category. That oversight remains amazing, not only because he would attain such eminence as Time Inc.’s founder and long-reigning autocrat but also because of what Luce, at 18, had already accomplished.

He had arrived in the United States at 14, the son of American Protestant missionaries in China. He had overweening ambitions even then, along with a highly developed sense of his own importance. He had none of the advantages that his classmates’ money could buy, and knew so little about American popular culture that prep school slang was alien to him. Yet he was prepared to struggle past every social, financial and intellectual obstacle that stood between his schoolboy realities and grandiose dreams. By graduation he had found a wealthy mentor, become editor of a campus publication and boastfully labeled it “First in the Prep School World.”

Luce’s success story would be sheer romance if it could surmount one basic problem: Luce himself. On the evidence of “The Publisher,” Alan Brinkley’s graceful and judicious biography, Luce began as an arrogant, awkward boy and did not grow any more beguiling as his fortunes rose. He made up in pretension what he lacked in personal charm, and he was “able to attract the respect but not usually the genuine affection of those around him.”

Still, his fierce determination, grounded in his father’s missionary rectitude and sense of purpose, could never be ignored during his lifetime (he died in 1967), though in recent years it has been. Mr. Brinkley makes a cogent case for why Luce’s story and the sometimes controversial history of his frankly partisan publishing empire deserve to be seen in a new light.

While at Hotchkiss, Luce met his polar opposite and future business partner, the gregarious and fun-loving Briton Hadden. These two were bound for glory, though they stopped en route for stints in the Army and at Yale. By the time they left college, they had penetrated Skull and Bones, Yale’s oxymoronic well-known secret society, and made enough valuable connections to last a lifetime. Or, in their case, to drum up sufficient money and interest to create what they called a “weekly news-magazine”: Time.
Janet Maslin's full story at NYT.
Posted by Beattie's Book Blog at 9:04 pm