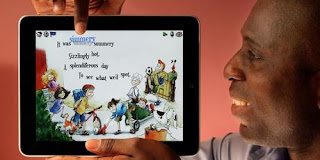 Above - Roger Shakes shows off a QBook on the Apple iPad. Photo / Brett Phibbs

The worldwide release of the iPad will see New Zealand children's literature translated into numerous languages and operating on a global scale never seen before, Kiwa Media says.
The Auckland-based business is believed to be the first company in the world to have created an interactive, touchsmart and voice-activated application of children's books for Apple devices.

Kiwa Media transforms printed books into digital content that can be downloaded from iTunes.
The company's QBook technology is available for iPod and iPod Touches and the iPad version of That's Not Junk is awaiting approval from Apple.
Kiwa Media vice-president Roger Shakes said the business hoped to have about 500 ebooks available for the iPad by Christmas.

"The challenge for all publishers is how to get this [printed] content on to a digital platform." said Shakes.
"Kindle is just in black and white, text format. QBook is in colour and has core functions, it spells words out, it's interactive. It makes [the story] come alive.

Penguin New Zealand is working with Kiwa Media to digitise its children's books.
Penguin's ebooks are available in English, Maori, Spanish, Portuguese, Japanese and soon Mandarin.
Read the full story at NZH.
Posted by Beattie's Book Blog at 8:07 am