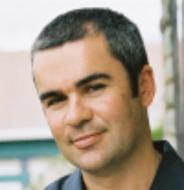 The Prix Sorcières is an annual literary prize awarded in France since 1986 to works of children's literature in a number of categories.

Qualifying works must be written in French or translated into French from the original language. Authors from outside France who have won the prize include Anthony Browne, Anne Fine, Michael Morpurgo and J. K. Rowling and now Bernard Beckett.
Congratulations Bernard, you are in illustrious company.
Posted by Beattie's Book Blog at 1:40 pm