POETRY ON POSTERS RECLAIMING THE WORLD. 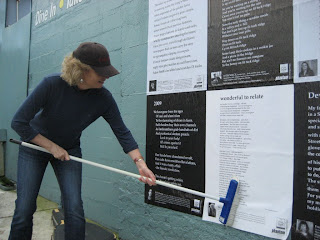 Giving poetry the street visibility of punk and rock and roll, Phantom Billstickers is once again launching a new series of poem posters in late April 2010. Placing poems on the walls of cities across New Zealand, the United States and towns and cities everywhere, the intent is to bring poetry to the attention of the world. This will be Phantom Billstickers fourth run of Poem Posters. http://www.0800phantom.co.nz/news.php

THE LAUNCH
The ten new poems will be launched at a ceremony on the 28th of April at the old Government House, University of Auckland, Princess Street and Waterloo Quadrant, Auckland, New Zealand. The event will take place from 5pm until 7pm. All are welcome.

THE POETS
This time an interesting mix of Kiwi and American poets will be featured.
From Aotearoa (New Zealand):

Tusiata Avia, Pacifika performance poet and current Ursula Bethel Writer in Residence at the University of Canterbury in Christchurch.

Then from the USA:

THE INSPIRATION
Jim Wilson, the founder of Phantom Billstickers New Zealand's poster company, is a keen advocate and committed supporter of poetry and the arts. Jim's aim is to take Kiwi arts to the world. He has worked to post streets and cafe walls with poem posters in places like Baltimore, Maryland, Knoxville and Nashville, Tennessee and then through to Seattle, Washington and Portland, Oregon. At least a dozen other American cities are also involved, from those in Mississippi State through to New York City.

Recently volunteers have been enlisted to place poem posters in Boulder, Colorado and Iowa City, Iowa (close to the Iowa Writers' Workshop which is arguably the top writers' workshop in the States). The city of Berlin, Germany, is also to be added to the list of destinations to feel the heat, passion and beauty of poem posters on its walls.

New Zealand, one of the poetry and music hearts of the world, first saw Phantom Billsticker's poem posters in June 2009. Cities and towns throughout the country enjoy a damn good pasting of poem posters and as top Kiwi poet Stephen Oliver puts it: "Poem posters are part of the dress code of any city that recommends itself to its citizens."

You can read about the poetry project on www.0800phantom.co.nz

Jim Wilson currently lives in New Jersey and may be contacted at jfwilson@chch.planet.org.nz

Printing poems on posters is largely about hope. In a world of splitting opinions, extreme violence and never-ending political and commercial intrigue, the aim is to bring Truth and Beauty back into the streets. This is what has been missing.

These posters and in fact all posters are truly 'Flora for the Concrete Jungle'. The wish is that people partake and celebrate in the creativity of language. The aim is inspirational and uplifting, the presence of poems in our cities is about re-claiming the world through art.

At the April 28th Launch some of the Phantom Billstickers poets will read and the event will be hosted by celebrated poet and New Zealand's inaugural Poet Laureate Michele Leggott. The evening will also feature LOUNGE#13 which is an exciting project run by the New Zealand Electronic Poetry Centre & the English Department at the University of Auckland. Local poets including Ben Daniels, Martin Edmond, Paula Green, Greg Zan, Zarah Butcher McGunnigle, Sacha Norrie, Jack Ross and Sonja Yelich will read.

"The only thing that can save the world is reclaiming the awareness of the world. That's what poetry does." Allen Ginsberg.

PHANTOMPOETRY
Poetry on Posters Reclaiming the World
Posted by Beattie's Book Blog at 6:08 am