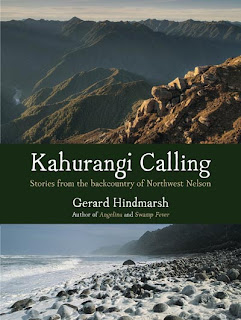 Kahurangi Calling:
Stories from the backcountry of Northwest Nelson

Rich stories from the backcountry of northwest Nelson are the subject of a new book being published by Craig Potton Publishing this month.

From archaeological digs uncovering evidence of settlement from the 1300s, to the characters who founded the Golden Bay Alpine and Tramping Club in the 1960s, and those who continue to enjoy the area today. Kahurangi Calling: Stories from the backcountry of Northwest Nelson by Gerard Hindmarsh is a masterful blend of natural and social history describing the ecological treasures of the area alongside the stories of the characters who explored and lived there.

‘The type of person who’s drawn to life in the backblocks does tend to be a
bit more colourful than most,’ says the Golden Bay author who’s spent more than twenty years researching the book.

After Fiordland, Kahurangi National Park is the second biggest stretch of unadulterated wilderness left in New Zealand. It is a sanctuary whose attraction lies in its wondrous geology and its unique plethora of flora and
fauna. And the tales of asbestos extraction, life-endangering expeditions, hunter gatherers living off the land, and the effects of the Murchison earthquake where whole mountain tops crashed make fascinating reading.

Kahurangi Calling: Stories from the backcountry of Northwest Nelson is an engaging read about a remarkable corner of New Zealand. It is packed with tales from historical and living memory of prospectors, farmers, trampers, hunters, hermits and many others. Anyone with a love of our backcountry will treasure this book.

Born in Wellington in 1957, Gerard Hindmarsh trained first as a cartographer before shifting to Golden Bay in 1976. Long-haul truck driving, fertiliser spreading, forestry, building a house and setting up a cinema all preceded his move into journalism in 1991. His award-winning feature writing has appeared in a variety of publications both here and overseas, and he also served for many years as National Radio’s Asian Correspondent on Kim Hill’s Nine to Noon show. He has five children and still lives on his land at Tukurua, near Colllingwood in Golden Bay, on the edge of Kahurangi National Park. His previous books include Angelina: From Stromboli to D’Urville Island, a fictionalised account of his grandparents’ lives, and Swamp Fever, a memoir of his time as an alternative lifestyler in Golden Bay.


Kahurangi Calling: Stories from the backcountry of
Northwest Nelson
by Gerard Hindmarsh is published by
Craig Potton Publishing, Nelson, RRP $39.99