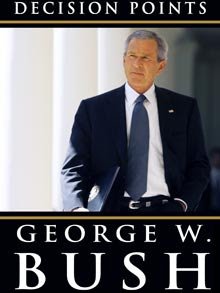 Mr Bush has said he is not writing a traditional memoir but an account of key decisions in his life. The cover features a photo of then-President Bush alone with his thoughts, standing in the Rose Garden Colonnade, wearing a dark suit and holding a briefing book, his head turned slightly from the camera.

According to Crown Publishers, "Decision Points" will offer "gripping, never-before-heard detail" on such historic events as the September 11, attacks and the 2000 presidential election along with Bush's decision to quit drinking, his relationship with his family and other personal details.

"Since leaving the Oval Office, President Bush has given virtually no interviews or public speeches about his presidency," Crown said in a statement. "Instead, he has spent almost every day writing 'Decision Points,' a strikingly personal and candid account revealing how and why he made the defining decisions in his consequential presidency and personal life."

A publishing industry source familiar with the book said that Mr Bush had completed a first draft and was editing the manuscript on a computer at his office in Dallas. A former White House speech writer, Chris Michel, is helping with research. The source was unsure whether Mr Bush had compared notes with his wife, Laura Bush, whose memoir comes out May 4.
Full story at The Telegraph.
Posted by Beattie's Book Blog at 11:25 am