Alan Sillitoe, angry young writer of the 1950s, dies at 82
Author of Saturday Night and Sunday Morning and The Loneliness of the Long Distance Runner gave a voice to those who challenged a deferential Britain
Michael Billington , guardian.co.uk, Sunday 25 April 2010 21.56 BST 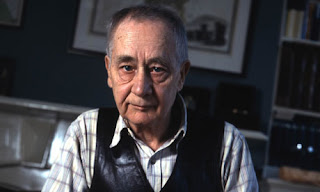 Alan Sillitoe, who died today aged 82, was part of a generation of working-class writers who shifted the boundaries of taste. Not that Sillitoe, born into the deprived family of a tannery labourer, liked to be defined purely by class. He once said of his 1958 work Saturday Night and Sunday Morning that "the greatest inaccuracy was ever to call the book a working-class novel for it is really nothing of the sort. It is simply a novel".
The key point about Sillitoe and the generation loosely dubbed Angry Young Men was that they were vehemently anti-authority. The hero of Kingsley Amis's Lucky Jim (1954) pulled rude faces and mocked the official culture of his academic seniors. John Osborne's Jimmy Porter in Look Back in Anger (1956) eloquently savaged anyone in a position of power. Joe Lampton in John Braine's Room at the Top (1958) raged against the "zombies" in authority. And then along came Sillitoe's Arthur Seaton in Saturday Night and Sunday Morning, who roundly declared himself beyond morality: "That's what all those looney laws are for, yer know: to be broken by blokes like me."
Full piece at The Guardian.
Posted by Beattie's Book Blog at 9:44 pm