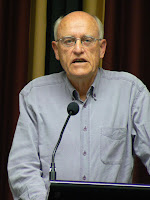 This was the heading in a Sunday Star Times story , April 18,  2010. The story is a follow up to the one that appeared in the Sunday Star Times the week before in which Stead was criticised for a "thinly veiled attack on deceased fellow author Nigel Cox.
In the story Stead comments on author Keri Hulme (left below) and book judge Stephen Stratford. It reads in part: 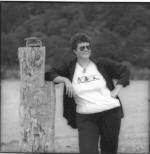 Stead, who was admitted into the Order of New Zealand in 2007, is the recipient of many literary accolades. The 1964 book of his PhD study of Yeats, Pound, Eliot and the Georgian poets, The New Poetic, reportedly sold more than 100,000 copies.
In 2007 he told The Guardian: "I think Keri Hulme in particular is a genius. There are all kinds of things wrong with The Bone People, but it is clearly the work of a major writer." Last week he said "people should start attending to Keri Hulme again when she is a writer again. She is not a writer at the moment, she gave up long ago, and when she starts again she will earn attention".

He said appearing in Private Eye doesn't concern him. "It's a famous, scurrilous and very entertaining magazine. So one is unlikely to figure in Private Eye in a flattering light; it's not in the business of making people look good."
He said he is concerned that the source of the story appears to be Stratford's blog.
"He is, in an essence, a literary wannabe; he is essentially a literary gossip columnist." Stead again criticised Stratford's position as chairman of judges of the NZ Post book awards.

For the full Sunday Star Times story link here to their website.
Posted by Beattie's Book Blog at 6:39 am