A mix of débuts and established names have made the Orange Prize for Fiction shortlist, announced today (20th April) at a breakfast event at the London Book Fair. The shortlist was indie-heavy with four books on the list, two from Faber and one each from Alma and Serpent's Tail.

"This shortlist achieves the near impossible of combining literary merit with sheer readability," said chair of judges Daisy Goodwin.
"With a thriller, historical novels that reflect our world back to us, as well as a tragicomedy about post-9/11 America—there is something here to challenge, amuse and enthrall every kind of reader."

The Very Thought of You by Rosie Alison (Alma Books)

The Lacuna by Barbara Kingsolver (Faber)

A Gate at the Stairs by Lorrie Moore (Faber) 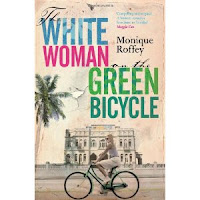 The White Woman on the Green Bicycle by Monique Roffey (S&S)
Posted by Beattie's Book Blog at 6:05 am