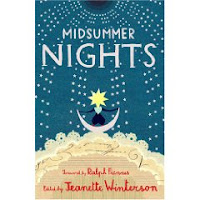 To Die For
What happens when the prince falls for a pill-popping Hollywood starlet and takes her to Sandringham?
To mark Glyndebourne's 75th anniversary, Kate Atkinson brings the story of La Traviata into the 21st century, while Posy Simmonds celebrates the festival in a new set of drawings
Kate Atkinson
The Guardian, Saturday 28 March 2009 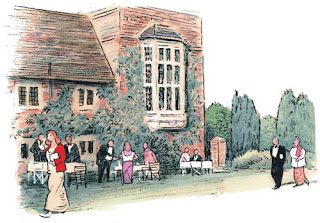 Illustration by Posy Simmonds from her series Midsummer Night at Glyndebourne
"Opera does not threaten us. Fiction does." Frederick R Karl, A Reader's Guide to the Development of the English Novel in the 18th Century
Midsummer Nights
Edited by Jeanette Winterson
A collection of stories inspired by opera ,
Quercus,
£17.99
There was this old English actress called Phoebe Something-Or-Other. Hart-Williams? Hill-West? Skylar never could remember (not that she tried very hard). Phoebe Something-Or-Other was huge, like a big old toad and, on set, in between takes, she sat in a corner and did some kind of sewing. ("Cross-stitch. You should try it, sweetie.") It didn't matter who you were, star of the movie or a faceless runner, you were "sweetie" to her. It got on Skylar's nerves. It was so British. She was tired of everything British, especially the weather.
They were in the make-up trailer, five in the morning in the middle of nowhere. (Kent? Somethingshire?) Wherever it was, it was green and dripping with water. Every day on location they had to stop for rain, most days they never even got started. They were shooting an outdoor scene where Skylar had to ride a horse down a hill towards a big old house. She had to cry as she rode. Then she had to jump off the horse and run towards Phoebe (who was playing her grandmother), standing on the steps of the house.
They weren't allowed inside the house.
Skylar would have liked to have seen inside the house. Skylar's tears should be, according to the director, "a mixture of joy and relief, tinged with sadness and regret for what might have been". All that and on a horse! What did he think she was? ("An actress, sweetie?")
The script called for the horse to gallop but they'd compromised on a kind of trot because horses made Skylar want to pee her pants. They were so damn big! Skylar was barely five foot two and way under a hundred pounds. Of course, she looked gigantic on screen but Mom had been helping Skylar keep the pounds off ever since she won the Augusta Sweet Pea Pageant when she was knee-high to a gnat's heel.
They refused to dope the horse so she had to fill herself with Xanax and be hitched up by the horse wrangler and the chief stunt guy. Over and over, because of the rain, because of the petrified expression on Skylar's face. Plus, she had to do the whole thing side-saddle in a dress the size of a Big Top. It was a costume drama, an 18th-century thing, about thwarted passion, from some novel that had won a prize. The Girl Who Went Astray - which was a real dumb title in Skylar's opinion. The crew called it The Girl With Big Tits. Some people had no manners. They were big, it was true, they'd been paid for with the money from a Dr Pepper ad she did when she was 16. She was 22 now. She hoped that if she ever got to be as old as Phoebe someone would shoot her.
Read the full story at The Guardian online.
Posted by Beattie's Book Blog at 7:53 am