Debut novelist Joanna Smith Rakoff was forced to change the title of her book after it emerged that acclaimed Irish author Colm Tóibín had plumped for the same name for his own forthcoming novel.
Rakoff's debut, Brooklyn, was sold to US publisher Scribner, part of Simon & Schuster, for a six-figure sum last year.
About the lives of a group of arts graduates struggling to follow their dreams in booming 1990s Brooklyn, her advance constituted a considerable sum for a debut novel and was an exciting deal for the author, who had been working on the book since 2002.
But shortly after the deal was struck, Rakoff was told by her publisher that she'd have to come up with a new title for the book, which is published next month, as Tóibín had decided to call his sixth novel Brooklyn as well. Tóibín's novel, also published by Scribner and out in May, follows the story of a young girl growing up in Ireland after the second world war, who is sponsored by an Irish priest from Brooklyn to go and live in a Brooklyn neighbourhood "just like Ireland" after she fails to find a job in her home country. Nan Graham, Scribner editor-in-chief, said that Tóibín had been calling his book Brooklyn for over a year, since he started writing it.
"It was rather difficult," said Rakoff in a telephone interview today. "I'd been thinking of it as Brooklyn for so long, it was hard to shake that." She was "shocked, rather than upset", she said, although "there was a dark period where there were tears and I felt unable to come up with a title".
She and her publisher and agent put their heads together to come up with a new title - one suggestion, she said, had been Life and Love in Brooklyn, but "everyone knew that was awful". 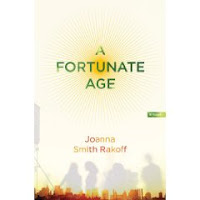 Then the new title, A Fortunate Age, came to her, and she "liked the double meaning of it". "They're living in a fortunate age, but they've also missed out on the fortunes of the age due to their own shortcomings."
The title of a book, Rakoff insists, "really, really does matter". "I wanted a perfect title, I didn't want a compromised title. And I don't feel I got that - I'm so happy I was forced to change it," she said. "I'm really grateful. If the Colm Tóibín thing hadn't happened would they have asked? I don't think so, but I'm so glad they did as I much prefer this title, it's so much more appropriate." Graham agreed, saying that all involved "love" the new title.
Rakoff hasn't, she added, read the new Tóibín, although she hopes to soon.
Posted by Beattie's Book Blog at 8:24 am