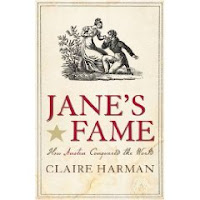 From The Times
March 28, 2009
Jane's Fame: How Jane Austen Conquered the World by Claire Harman
The Times review by John Sutherland
If Claire Harman's pleasingly unstuffy chronicle of Jane Austen's reputation tells us anything it is that the “Lady”, as she titled herself, who wrote Pride and Prejudice has come an awfully long way since 1813. It is in the past 20 years, Harman suggests, that Jane Austen has “conquered the world”. She is no longer a writer; she is a phenomenon.
Thirty years ago an American professor, Warren Roberts, published a monograph entitled Jane Austen and the French Revolution. It was met with uproarious mirth. If a person knew anything about Austen it was that she never mentions the French Revolution. The New Statesman ran a competition inviting similarly ludicrous combinations: E. M. Forster and Bodybuilding, etc.
Professor Roberts was, however, making a serious point. We repress things that are so important to us that we dare not be conscious of them. Freud 101. The French Revolution was Jane Austen's elephant in the room.
Nowadays, to go boldly into areas into that even Harman is occasionally reluctant to probe, we are much interested in a different pachyderm in the Austen room. What, over the past couple of months, has been the most looked-at item of Austeniana? With A-level exams coming up, you might guess the Penguin Classics Pride and Prejudice, or possibly the DVD of that delightful skit Lost in Austen.
Wrong. It's Porn and Penetration: a “knockoff”, as the porn and penetration trade calls them. Mr Google will find it for you in seconds, flagging the tens of thousands of hits that the video has received. By the blood-curdling standards of contemporary pornography P&P is harmless burlesque. A troupe of actors in high Regency dress do a series of scenes that, at first sight, look exactly like those of any Andrew Davies screen adaptation. But then they go a tiny step farther. Only one scene, involving Elizabeth Bennet and a billiard table, veers into the mildly distasteful.
Don't expect a learned monograph entitled Jane Austen and Copulation, even from the dry highlands of US academia. But the point being made by the saucy makers of Porn and Penetration is the same as that made by the unsaucy Professor Roberts, namely that the missing bits are what fascinate us most in Austen.
All six novels are about the rocky road to a young woman's happy marriage. Seducers lie everywhere in ambush: Frederick Tilney, George Wickham, John Willoughby, Frank Churchill, William Eliot: predators all. But the novels are, on the face of it, wholly uncarnal. The nearest we get to a sex scene is when Willoughby (sly devil) fingers Marianne Dashwood's sprained ankle with rather more interest than the injured limb might be thought to require.
In the background of the narratives, of course, the prurient ear can usually detect some suspicious rustling. “Coltish” Lydia Bennet, we surmise, is bonking everything in a red coat in the garrison town of Meryton. But Miss Austen primly averts her eyes and keeps narrative attention focused on the teacups at Longbourn.
It infuriates some readers. “Narrow gutted spinster,” D. H. Lawrence snarled. A novelist whose thighs were so firmly clamped could never open herself to life.
Read ther full piece at The Times online.
Jane's Fame: How Jane Austen Conquered the World by Claire Harman -
Canongate, £20
Posted by Beattie's Book Blog at 7:43 am